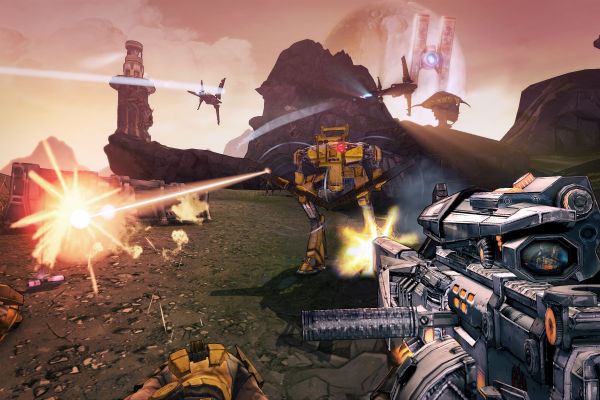 2K and Gearbox Software have released the Borderlands 2 Ultimate Vault Hunter Upgrade Pack via digital download across all available platforms. The new downloadable content pack will increase players’ level cap from 50 to 61, as well as unlock a third play through of the game via the Ultimate Vault Hunter Mode, and a new pearlescent-colored weapons tier – the rarest on Pandora.

With over 55 editorial awards and nearly six-million units sold-in to date, 2K and Gearbox are celebrating the critical and commercial success of Borderlands 2 and thanking their most passionate fans by including theUltimate Vault Hunter Upgrade Pack as part of the Borderlands 2 Season Pass. The pack can also be purchased individually for $4.99 (400 Microsoft Points).

"Millions of vault hunters have spent countless hours adventuring their way through the Borderlands 2 universe," said Randy Pitchford, president of Gearbox Software. “Raising the level cap takes a significant amount of man hours, but we know fans are eager to continue looting Pandora, and so we’re rewarding our Season Pass holders by offering the Ultimate Vault Hunter Upgrade Pack for free as a part of the celebration.”

There’s never been a better time to buy the Borderlands 2 Season Pass, which now contains nearly $45.00 of content for $29.99 (2400 Microsoft Points), a savings of $15 (1200 Microsoft Points). The pass now includes: the increased level cap; Ultimate Vault Hunter Mode; access to a rare pearlescent-colored weapons tier; three previously released add-on content campaigns – Captain Scarlett and Her Pirate’s Booty, Mr. Torgue’s Campaign of Carnage, and Sir Hammerlock’s Big Game Hunt – as well as a fourth add-on campaign that is scheduled to be available by June.

“Borderlands 2 continues to captivate audiences well beyond the game’s end, with some of our fans spending hundreds of hours with the game,” said Christoph Hartmann, president of 2K. “We’re raising the level cap at no cost to our dedicated fans as our way of thanking them for helping to make Borderlands 2 one of 2012’s biggest hits.”

Borderlands 2 is rated M for Mature by the ESRB and is available now on the Xbox 360,  PlayStation 3 and Windows PC.

Developed by Gearbox Software, Borderlands 2 is the critically acclaimed sequel to the breakout original that invented a new genre, the FPS/RPG hybrid known as “shooter-looter.” Borderlands 2 features all-new characters and skill trees, diverse new environments, missions and enemies, as well as weapons and equipment with more personality than ever before. Players experience an all-new story that takes place five years after the events of the original game. Four friends can team up online to journey through the huge, open world of Pandora to take down the notorious Handsome Jack and his corrupt Hyperion Corporation.

We Happy Few Launches On August 10

Discover the dark secret of the city!

Just in time for Halloween!