BioShock Infinite released this month to critical acclaim. In Infinite you're set in is Columbia, a city located in the clouds with all the potential to be great, but its only on the surface level. The more you progress you start to notice the darker side of city , which brings up the grittier aspects of the 1912 time period. Music plays a big role in Infinite as it shapes main characters, and the tone of the game. We got a chance to talk with Garry Schyman, the composer behind the game, and asked him what where the challenges behind scoring BioShock Infinite.

GamerHub.TV: How did you get involved in game composition?

The first game I ever scored was in the early–mid ‘90s when a friend of mine went to work at Phillips Interactive. They had their own technology called CD-I, which permitted stereo files to be compressed and used in a game. That allowed me to work with an orchestra in 1994 for that project which was one of the very first orchestral scores for a video game. I did a few games for them but that platform went south and I did not score another game until 2004 when my agent sent my resume over to THQ and they listened to some of my music that I sent over, and they heard something that fit a game they were making called Destroy All Humans!  They wanted a 1950s score a la Bernard Herrmann’s score for The Day The Earth Stood Still and as it turned out I had scored a project in the style of Mr. Herrmann so when they heard that they hired me.  I had a great time working on that title, I had an orchestral budget and it was really fun to score plus I got nominated for some awards.  What more could you ask for? 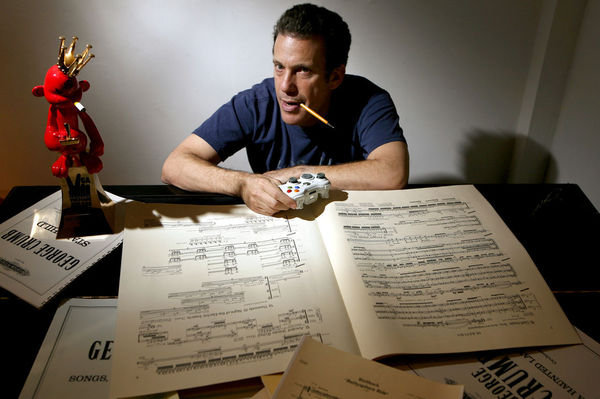 GamerHub.TV: How did you separate Infinite from the first two BioShock games?

Though it shares the name BioShock with the first two games, Infinite is a completely different game. Its setting, its characters, its style, the whole feel of the game is really unique and different so the developer and I wanted a completely new and unique sound for the score. That was the critical, looking at the new game with the time period of 1912, the city in the sky with an American vibe; it was an American city that had broken away from America above so everything about it demanded a unique style.

GamerHub.TV: Is there any resemblance of the original BioShock score in Infinite?

There are one or two cues that have some relationship but for a very specific purpose. Otherwise, no.

GamerHub.TV: Let's start off at the very beginning of the game when we are welcomed into Columbia. The build up is drawn from the music you provided. Can you talk about that scene, and how it came together?

I’m assuming you’re talking about a piece of music called “Lighter Than Air” where you’ve entered the city and you’ve opened these gates and Columbia becomes visible to you in all its glories and wonders. That particular piece of music was based on the feel and the vibe of the great 19 century American songwriter Stephen Foster and I sort of just amalgamated his style. But within the Stephen Foster sound, this beautiful song from say 1890, I have this chromatic, dark, eerie background sliding around behind it to barely just suggest that this city that looks so perfect and beautiful is not perfect and beautiful.