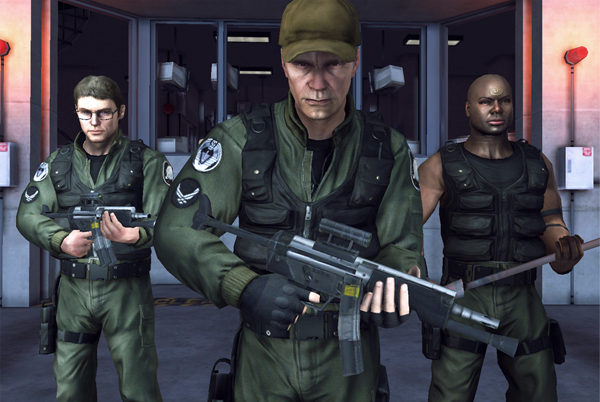 For the first time in years, the original cast from the highly popular long-running TV series, Stargate SG-1, reunited to voice their SG-1 characters in the game. Richard Dean Anderson (as Jack O’Neil), Amanda Tapping (as Samantha Carter), Michael Shanks (as Daniel Jackson) and Christopher Judge (as Teal’c) headline the voice cast for the new episode with dialogue cleverly crafted by script writer Sally Malcolm to reflect each of the SG-1 characters’ distinctive personalities. Check out this exclusive video interview about the game with the show’s producer.

Stargate SG-1: Unleashed’s story revolves around the SG-1 team in an all new adventure that takes them through the Stargate in an effort to reveal the mysteries behind a new and dangerous Goa’uld enemy. Players are engaged in the third-person adventure, commanding Colonel O’Neill, and characters Captain Carter and Dr. Jackson as they travel to unknown worlds, defeat Jaffa warriors, infiltrate a Goa’uld slave camp, explore mysterious temples, decipher new technology and solve cryptic puzzles.

“The fans have been asking for new Stargate content since the TV series ended years ago,” said Darren Thomas, Producer. “And we’re pleased that MGM has entrusted us to carry on the franchise via these interactive episodes. I think the fans really have something to get excited about.”

The series is out on the App Store for iPad and iPhone and coming soon for Android.