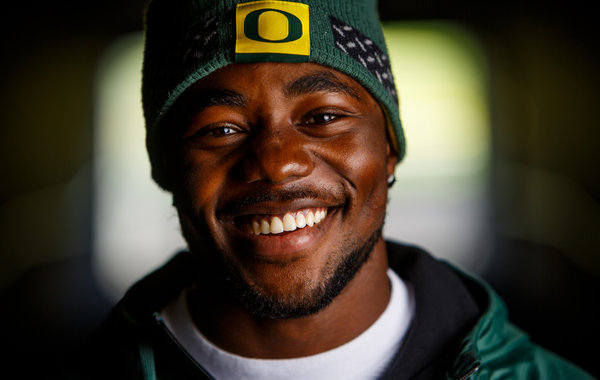 Before being selected by the Carolina Panthers, former Oregon Ducks running back Kenjon Barner took on NFL pros in Madden NFL 13 at the Madden Bowl in New Orleans. He then spent time with EA Sports at its Tiburon Studio to get an early look at NCAA Football 14 and Madden NFL 25. The college standout talks about his own gaming background in this exclusive interview.

You’ve been featured in NCAA Football games in the past, kind of, because they can’t really use your real name and likeness. What’s it going to be like to see your real likeness and your real name in the new Madden NFL 25?

For me, not being any other kind of gamer, I always went and put my real name and my real home town in the games. I put everything in place, so it won’t be too much different, because I’ve put it in place before. But I’ll already be there, so I don’t have to go and change anything. I’m definitely looking forward to that.

What’s a favorite memory of playing NCAA Football video games over the years that you can share with us?

My favorite memories came from any time beating my brothers. My brothers were extremely annoying to play against in video games, especially in football video games, because they always won. Any time I took a victory over them, I celebrated like I won the Super Bowl.

Did you have a go-to team back them?

In college before I got to Oregon, it would be Miami. I used to take Miami back in the day, and UNC. I was a big UNC fan before I went to Oregon. Now, since I’ve been in college, I roll with the Ducks all day.

It seemed like last year, and especially some of the scores your Ducks guys were able to put up there, that college football has become like a video game. What’s it like for you guys when you’re running full click and putting so many points up there on the scoreboard?

You felt like you’re in a video game. You don’t really feel it while you’re in it, but once you get into that locker room and we sit back – take, for instance, our USC game that we had this year (62-51). We’re on the plane ride home, and we’re like, “Wow. This was really like a video game between both teams.” So to go out and be able to put up that many points, score that fast, and do all the things that Oregon was able to do is extremely video game-like, and you have to love it. It’s a lot of fun.