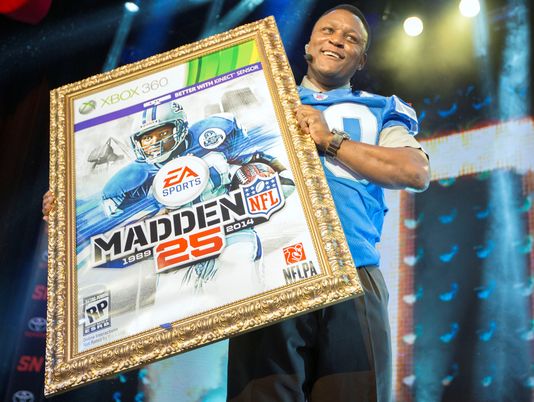 Electronic Arts, with the help of ESPN and football fans, crowned Barry Sanders as the cover athlete for Madden NFL 25 after six rounds and a record-breaking 40 million votes. The results were revealed during a 1 hour primetime special on SportsNation on ESPN 2, when Old School bracket champion Barry Sanders defeated New School bracket winner Adrian Peterson by taking 58% of the final vote.

During his run to the cover, Sanders triumphed over a who’s who of NFL legends, including Ray Lewis, Joe Montana and Jerry Rice. Sanders’ win is historic in many ways, as not only will he be appearing on the cover of the 25th anniversary of the Madden NFL franchise, but he is the first athlete ever to appear on back-to-back covers after sharing the NCAA Football 13 box with Robert Griffin III last year.

“The Madden NFL franchise has such a rich tradition and history, and there’s no better way to celebrate our 25th Anniversary than by having one of the best players of all-time on the cover,” said Anthony Stevenson, Senior Director of Marketing for EA SPORTS. “Barry Sanders has long been a fan favorite, so we’re proud to have him as the face of Madden NFL 25.”

The announcement was made during the NFL Draft week in New York City. Sanders worked with EA as a co-cover athlete for Madden NFL 2000. He played in last year's Madden NFL 13 Pigskin Pro Am in Chicago and also attended the Madden Bowl in New Orleans this year with EA.