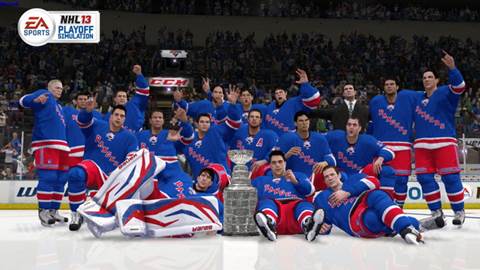 According to the official EA Sports NHL Playoff Prediction using NHL 13, the New York Rangers will beat the Chicago Blackhawks in six games to become the 2013 Stanley Cup Champions. There might be an asterisk next to the feat, given the lockout-shortened season. Check out what’s in store for next season in the NFL 14 preview below.

The Chicago Blackhawks looked unbeatable as they progressed through the rounds, winning each series in five games before falling to the Rangers in six games. The Western Conference saw two upsets in the opening round with the Detroit Red Wings (7) beating the Anaheim Ducks (2), while the Los Angeles Kings (5) defeated the St. Louis Blues (4).

The Toronto Maple Leafs were eliminated in the first round of the simulation, although they did manage to take their Original Six rivals, the Boston Bruins, to seven games.

The Pittsburgh Penguins, who looked to be a strong favorite to win the Stanley Cup, fell to the Rangers in seven games in the Eastern Conference Semifinals.

A Hockey game where the action is different every single time, sign me up!

Check out the newest installment of Chichuki Views.