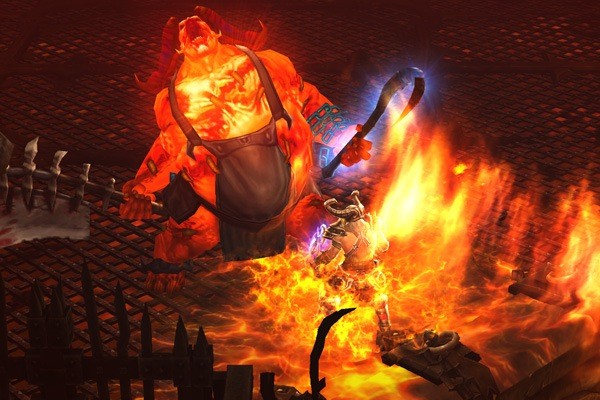 PlayStation gamers, the time has come to prepare for your confrontation with the Lord of Terror. Select retailers around the world have now begun taking preorders for the upcoming PlayStation3 system version of Diablo III—see the official website for a list of participating retailers. Fully reimagined for couch-based gaming, Diablo III for PS3 will go on sale later this year for a suggested retail price of $60. Further release details, including region-specific availability, will be announced at a later date.

Players who preorder the PS3 version of Diablo III will receive an exclusive in-game item: the Infernal Helm, which grants an experience point boost to any character who wears it, accelerating their progression as they rise in power. Certain retailers will also offer limited-edition preorder bonuses—check with your local retailer for further information. The PS3 version of Diablo III will be available fully localized in English, German, French, Spanish, Russian, Italian, Polish, and Brazilian Portuguese.

“We’ve poured blood, sweat, and hellfire into creating an epic Diablo III experience for PlayStation gamers,” said Mike Morhaime, CEO and cofounder of Blizzard Entertainment. “In addition to including all the improvements from the PC version over the past year, we’ve made several updates to Diablo III for play on the PS3. We got a ton of positive feedback from players who tried the game at PAX East, and we can’t wait to get it into everyone’s hands later this year.”