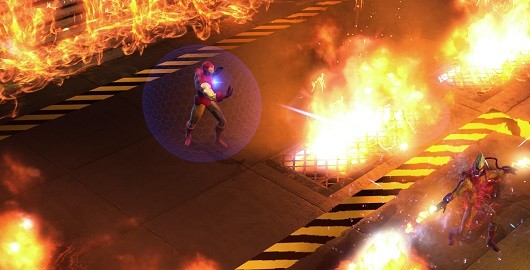 In honor of Marvel’s Iron Man 3 movie launch, Gazillion Entertainment will kick off a Marvel Heroes Iron Man 3 Open Beta Weekend beginning on Friday, May 3 at 7:00 PM PT through Monday May 6 at 10:00AM PT. In order to access this beta, players can register at www.MarvelHeroes.com.

As part of the Iron Man 3 Open Beta Weekend, new players who participate will be able to select an Avenger as their starting hero - including Iron Man, Thor, Hulk, Captain America and Black Widow.  There are over 14 Iron Man armors that will be available in Marvel Heroes spanning the Golden Avenger’s illustrious career in comics and movies (Iron Man, Iron Man 2, Iron Man 3, The Avengers).

Gazillion Entertainment’s Marvel Heroes is the Marvel MMO you’ve been waiting for. Marvel Heroes is an action MMORPG for PC created by David Brevik, the visionary behind Diablo and Diablo 2. Set in the heralded Marvel Universe, Marvel Heroes combines the core game-play style of action RPGs and MMOs with an extensive original story crafted by Marvel super-scribe Brian Michael Bendis.

In Marvel Heroes, players suit up and collect their favorite Marvel superheroes including Iron Man, Thor, Wolverine, Hulk, Spider-Man, Captain America and many more as they team up with friends to try to stop Doctor Doom from devastating the world with the power of the Cosmic Cube. Marvel Heroes features a deep leveling system unique to each character, diverse locations set across the expansive Marvel universe, a robust crafting system and much more. Marvel Heroes will be making its debut on PC as a free-to-play game on June 4, 2013.