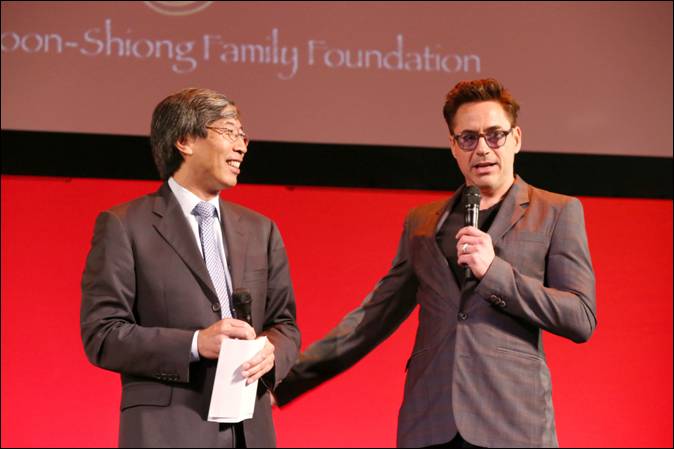 At Marvel’s Iron Man 3: Inventor and Innovator Fair, the star of Iron Man 3 took the stage with the 12 winners of the national contest just as the third movie hit the box office bonanza. The nationwide science competition held in conjunction with the release of Iron Man 3, sponsored by Discovery Science Center, Broadcom Foundation and Marvel Studios, along with Visa Signature and the famous El Capitan Theatre in Hollywood, awarded a dozen winners with a trip to Los Angeles. On the evening of May 3rd, at the 4:30pm screening of Marvel’s Iron Man 3, Grand Prize winners received their awards in a special ceremony onstage at the El Capitan Theatre, hosted by Asa Kalama, a Walt Disney Imagineer, and Iron Man, himself. All 12 finalists will have their projects on display at the El Capitan from May 3rd – June 19th.

Like Iron Man’s alter ego, Tony Stark, these young geniuses are discovering and creating the world for tomorrow.  And getting to be a finalist hasn’t been easy.  Sixth through ninth-grade girls and boys across the nation were invited to participate in the contest and asked to produce innovative, inventive projects based on STEM themes from “Iron Man 3” — STEM: (science, technology,engineering and math).   The competition encouraged students to submit projects that aligned with the National Academy of Engineering’s (NAE) Grand Challenges for Engineering™.

Earlier this month, after judges reviewed over 300 science projects from all over the country, 30 semi-finalists were chosen. From the 30 semi-finalists, the panel of judges chose 12 finalists, who will compete for the grand prize awards.