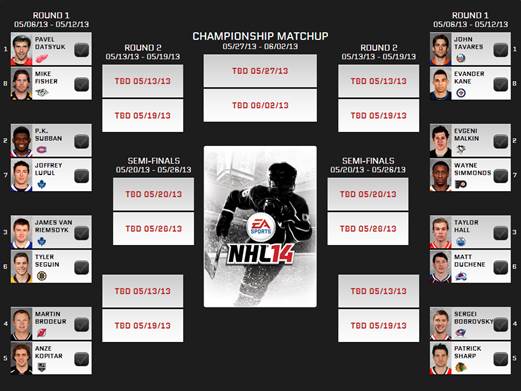 EA SPORTS, the National Hockey League Players’ Association (NHLPA), and the National Hockey League (NHL) have narrowed things down to the Sweet 16 of NHL players who have advanced to the next round of the EA SPORTS NHL 14Cover Vote. Beginning today, the campaign shifts to a 16-player bracket format as players compete in head-to-head matchups for a spot in the quarterfinals. NHL 14 will be available for the Xbox 360and PlayStation 3 on Sept. 10, but you can check out a first look in the exclusive video interview below.

Fans have voted more than 12 million times through the first two rounds, with daily vote totals up nearly 70% over the NHL 13 Cover Vote Campaign. Fans can vote an unlimited number of times at NHL.com/CoverVote. Voting for this round closes on May 12 at 11:59pm ET. The winner of the cover vote campaign will be revealed as the NHL 14 Cover Athlete during the 2013 Stanley Cup Final.