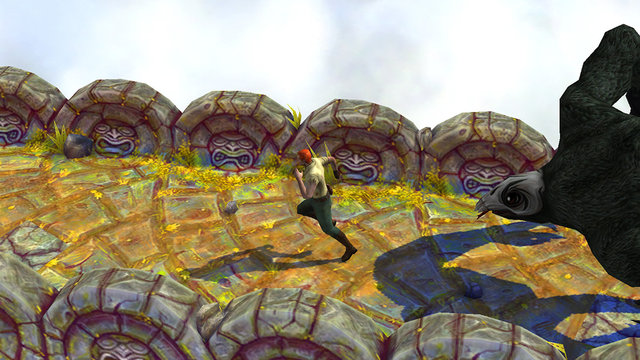 Imangi Studios has released a new update for the hit-mobile game Temple Run 2. This new update will test Temple Run 2’s millions of daily active players with new roadblocks and tasks, bringing even more challenges to the beloved game. Check out the game running on the new Samsung Galaxy S4 smartphone in the video below.

The latest update includes a new landscape called The Narrows, which introduces a treacherous new terrain to the game that includes spinning saw blades that create exciting obstacles to avoid and a crumbling path that keeps players on watch for last minute turns and jumps. There are also new chances to earn free coins and gems, available under the Free Stuff menu.

With over 300 million downloads between Temple Run and Temple Run 2, the series is one of the biggest franchises in mobile gaming.Since the launch of the original game in 2011, the brand has expanded to include apparel with Komar Kids, digital comics with Ape Entertainment, and card and board games with Spin Master, among other licensing partnerships. Imangi has collaborated twice with Disney to launch Temple Run: Brave and Temple Run: Oz.

Imangi Studios was founded by husband and wife team Keith Shepherd and Natalia Luckyanova in 2008 with the goal of creating small fun games for everyone to enjoy.  What started as a dream job for the couple has evolved into a successful business, with Keith and Natalia now working with a team of other talented game creators. In 2011, the studio developed the mega-hit Temple Run, and followed with Temple Run 2 in 2012. The two games have been downloaded over 300 million times. Based in North Carolina, Imangi Studios is a self-funded and fully independent studio.

King of the monsters