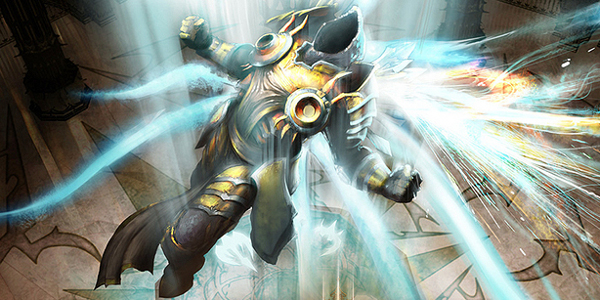 From Insight Editions and Blizzard Entertainment, the makers of critically acclaimed games such as World of Warcraft, StarCraft II: Heart of the Swarm, and Diablo III, comes this exciting companion edition to  Diablo III: Book of Cain. Diablo III: Book of Tyrael gives players an in-depth look into the mind of the Archangel Tyrael and chronicles his involvement in the Diablo universe’s Eternal Conflict.

One of the most exciting and visceral action role-playing franchises in history, Diablo has become a worldwide gaming phenomenon. Diablo III: Book of Tyrael takes players even further into the universe with a detailed and beautifully crafted book of lore as seen through the eyes of Tyrael. As a former archangel of the High Heavens, Tyrael ranks among the most important and influential characters in the Diablo franchise. Here, in this illustrated and comprehensive tome, he reveals never-before-known secrets about the history of the world, the dark threats that yet face mankind, and his decision to join the ranks of humanity as a mortal. In Tyrael’s own words, “Forevermore we shall stand together, angels and men, in the light of this glorious new dawn.”

Featuring stunning original art throughout, writings from iconic Diablo series characters such as Leah and Deckard Cain, and a fully removable family tree.

Known for blockbuster hits including the Warcraft, StarCraft, and Diablo franchises, Blizzard Entertainment, Inc., is a premier developer and publisher of entertainment software renowned for creating some of the industry’s most critically acclaimed games.

Insight Editions is a publisher focused on creating superlative illustrated books on photography, music, and popular culture. Lavishly produced and visually stimulating, every volume from Insight is dedicated to the skillful interplay of word and image. The books produced are unique works that combine the highest quality print production values with time-honored publishing traditions and rich subject matter. Elegant and informative, books from Insight showcase the best of art and photography in exquisite presentations of the bookmaker’s craft.