Missed Opportunity: Why I Wish Remember Me Was A Better Game 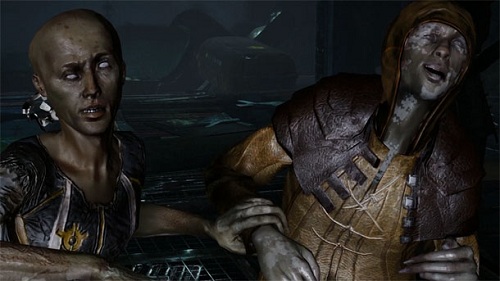 How some publishers view us.

The reviews for Remember Me stabbed at my heart.  Melodramatic?  Maybe.  But I had high hopes for this one.  Unfortunately, mediocre review scores accompanied by comments like "close, but not quite good enough" or "rookie design mistakes" painted a very clear picture.  This was not going to be an action adventure classic of this generation.  I understand that it is not horrible, but it did not go out of its way to stand out among the crowd.  In fact, this is probably another one of those "I bought when it was on sale on Steam for $5" type of titles.  And that, my dear readers, is a rotten shame.

It's not a rotten shame because of the fact that I was really looking forward to playing an awesome action adventure game.  It's not because I typically love sci-fi settings that pay a significant amount of attention to the current world we live in and build off of it.  It's not even the fact that the whole concept of memory manipulation seemed so cool that I partly expected that alone to carry the game into a modest level of greatness.  No, it was none of those things.  I am very disappointed because Remember Me had an opportunity to show the general game publisher community that the average video game consumer is not a one dimensional loaf who cares only about playing a mega-masculine, larger than life, over the top, action hero who can dual wield rocket launchers.  It feels like that opportunity is gone because of the other flaws in the game.

If you are not familiar with how the story goes, Remember Me creative director Jean-Maxime Moris told the game media that his title was rejected by a publisher simply for the fact that the protagonist was female.  In fact, the un-named publisher apparently also made comments that having the main character kiss a male character in the game would be "awkward" for the male consumers that they expected would be the target audience.  In other words, they reduced all of us to the most common insecure teenage male stereotype possible, which is even an insult to the average teenage males among us.

I sigh'ed at this when I first read it.  I sigh'ed a lot.  I even went off on a completely crazy rant on my personal blog about it.  To me it was inconceivable that any level of business people would insult and shrink their own market to such a small level and hurt the quality of the products they were trying to sell.  The opposite of developing their market, they were stunting its growth.

All of a sudden, Remember Me became the ray of light in the madness that seemed to be the marketing direction of the video game industry.  We finally had a game that fought the system, got a publisher that believed in the product as it was in its original state, and was going to push it out to much success.  This was the perfect revenge plot, for those of us who believe that the sweetest revenge is living well.  I will admit that the cynic in me did think that this might have been a clever marketing strategy.  A little sympathy never hurt anyone.  Still, the video game industry has such a long history of objectifying and overall de-valuing women that even I had to admit there was some merit to this.  Alas, the positive example that I had hoped that Remember Me would be is nothing more than a fantasy at this point.