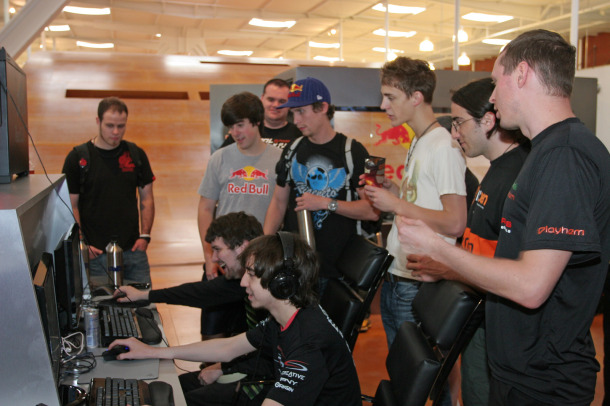 The Red Bull Training Grounds will give eight invited eSports athletes - and fans tuning in to the live digital broadcast from around the world - the opportunity to elevate their play in a weekend of intense match-ups and expert analysis. This first-of-the-season event, taking place June 21st – 23rd at Red Bull North America Headquarters in Santa Monica, will spotlight Blizzard Entertainment’s award winning real-time strategy game, StarCraft II, with $8,000 in prize money on the line to keep the competition more than friendly. Beloved eSports personality and legend Sean “Day[9]” Plott and fan favorites Mike “Husky” Lamond and Ben “MrBitter” Nichol will serve as commentators and inquisitors, calling the action as it happens, as well as interviewing each player to analyze their performance and up their game.

The eight participating players, invited from the cream of the eSports crop of European and North American pros, will scrimmage in a series of round-robin matches over the course of the first two days, giving each athlete the opportunity to experience one another’s signature tactics and evasive rebuttals. At the completion of each scrimmage, players head to the analysis booth to discuss and critique their performance, giving the audience at home a bleacher seat to the training regimes and techniques of top players, gaining strategic insight right alongside the pros.

Day three culminates in a tournament with the four players still standing. Reconvening for a final day of competitive play, the winner will walk away with the top prize purse – and an invitation to a future high stakes tournament.

The following weekend, alumni head to MLG Anaheim, to put their training weekend to the test on the global competitive tournament circuit, facing the best players from around the world. eSports aficionados and amateurs can get a sneak peek into tournament day preparation, watching these pro players refine and hone strategies, witnessing in action the strengths that could put them on top – and their work to triumph over their weaknesses.