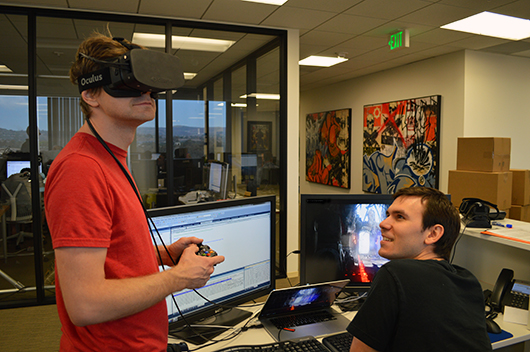 Oculus VR, developer of the Oculus Rift, has closed $16 million in Series A funding. The round was co-led by Spark Capital and Matrix Partners. Santo Politi, founder and general partner at Spark, and Antonio Rodriguez, serial entrepreneur and general partner at Matrix, have joined the company’s board of directors. Founders Fund as well as Formation 8 also participated in the round. The funds will be used to accelerate the development of virtual reality hardware, software and services, ultimately creating a full virtual reality platform for consumers.

“Oculus began with a single mission: to put players inside the game,” said Palmer Luckey, founder of Oculus VR and inventor of the Oculus Rift. “This investment allows us to deliver immersive and affordable virtual reality to players everywhere.”

The Oculus Rift is a virtual reality headset that provides an immersive, stereoscopic 3D experience with a huge field of view—110 degrees diagonally—and that overcomes latency challenges. A prototype of the Oculus Rift first appeared at E3 2012, immediately earning praise from the industry. Just one year later, Oculus has manufactured and successfully shipped the Rift development kits purchased in its Kickstarter campaign, allowing game developers across the globe to create Oculus-ready applications and interactive content.

“With the recent console announcements and the advent of stronger mobile technology, we’re watching the video game industry keenly,” said Mr. Politi. “In our estimation, Oculus is one of the only companies in the space with something completely new and disruptive. They have the right team, capital and vision to take virtual reality beyond console gaming and into everyday computing.”