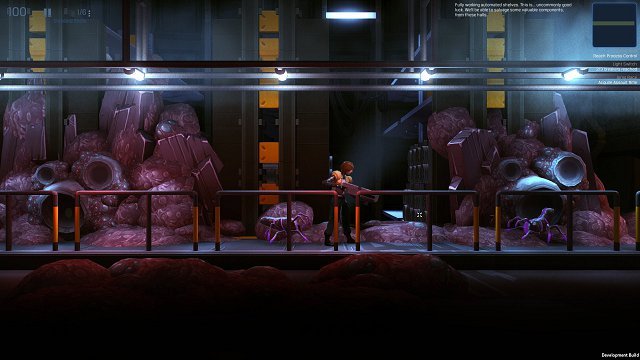 Interwave Studios has launched a Kickstarter and Steam Greenlight campaign that will run simultaneously for their upcoming DRM-free game Dark Matter. It’s a Metroid-like sci-fi side scrolling game that combines the twitch mechanics of a first person shooter with an adventure platformer.

“We could release Dark Matter right now in its beta form, but there is a level of polish and some necessary tweaking to gameplay mechanics required in order to ensure the game provides people with an exceptional, fun and intense experience. The funding will provide us with the additional two months we need to complete Dark Matter. At the same time, we are looking to publish Dark Matter via Steam Greenlight’s system that uses their community to pick upcoming new games,” said Igor Raffaele, general manager of InterWave Studios.

InterWave Studios will attempt to crowdsource and publish Dark Matter simultaneously over the course of the next 30 days. The funding will go directly to the game’s final two months of development to ensure that Dark Matter achieves the level of polish it deserves. In addition, InterWave will begin to reach out to its community with unique access to the game and the developers to help achieve the level of support it requires in the Greenlight community in order for Steam to publish the game.

“As part of the Kickstarter campaign, we are going to do something truly unprecedented by granting our higher level backers access to Dark Matter's beta version during the campaign so that they can help dictate the game's development by providing feedback to us directly via our forums and one-on-one meetings,” said Raffaele. “With our backers’ feedback and support, our goal is to create the type of game we want to play rather than the type of game big studios would force on players. Big publishers would normally ignore smaller games with lower profit margins like Dark Matter, but we are an independent studio, so we don’t have to sell millions of games in order to be successful. We don’t have to appease shareholders. We only have to make our fans happy. It is this philosophy that allows us to create games like Dark Matter and we look forward to sharing it with everyone.”