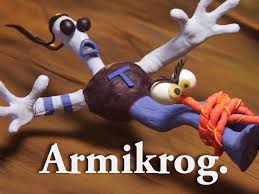 Doug Tennapel may not be the most recognizable name in gaming, but he deserves to be.  He's taken part in a number of projects that have proven memorable over the years, including the creation of 16-bit hero Earthworm Jim and the forming of the Neverhood, a series of games that include the engaging PlayStation 1 platformer Skullmonkeys.  Now Doug is back, with Pencil Test Studios in tow, for a new project called Armikrog, which he's currently working to get funded through KickStarter.  At this point, less than three days remain on it, but it's very close to its goal, with over $700,000 of its $900,000 goal reached.  (You can give to the KickStarter here.)

We sat down with Doug recently to talk about the project through five brief, but in-depth, questions.  After you're done reading, you'll definitely want to see where this clay-animated game goes...especially if it winds up on Wii U.

Where did the inspiration for Armikrog come from?  Were you itching to do a new adventure game like The Neverhood, or striving for something different?

Tennapel: I was striving to do something different. I'm always wanting to create something new instead of ape something old. But the Neverhood has some great principles at work that we'd be crazy to leave behind and they're perfectly applicable to a new game. Stop motion must be brought back!