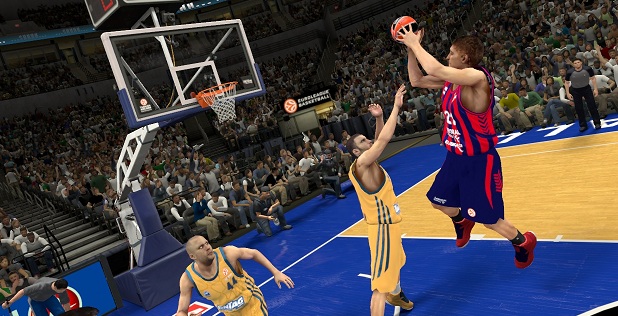 As if having LeBron James on the cover isn't enough for international recognition, 2K Sports and Euroleague Basketball have entered into an exclusive multi-year global partnership that will see top teams from the Turkish Airlines Euroleague available in NBA 2K14, the next installment of the top-selling and top-rated NBA video game simulation franchise. The new basketball game will be out on PlayStation 3, PlayStation 4, Xbox 360 and Xbox One this fall.

This marks the first time Euroleague teams have appeared in the critically acclaimed NBA 2K series.  Fourteen teams in total will be integrated as playable teams in NBA 2K14, allowing fans of European basketball to pit their local teams against the biggest teams from the NBA.

“We’re absolutely delighted to welcome top Euroleague teams into the NBA 2K series,” said Jason Argent, Senior Vice President of Sports Operations at 2K.  “European basketball has an incredibly passionate following, and we’re all excited to give fans the opportunity to take on Europe’s best in NBA 2K14.”

“We are very proud to collaborate with 2K Sports by introducing our teams and players into the best basketball video game in the world,” added Jordi Bertomeu, Euroleague Basketball President and CEO.  “With this partnership, we’re able to bring fans one step closer to the action by ushering the Euroleague into the global gaming community.”