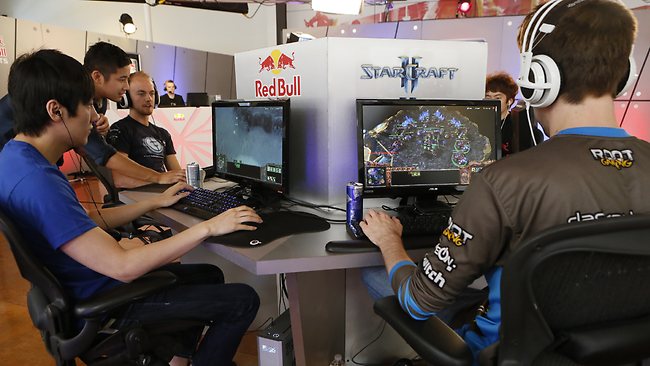 Intense action, focus and concentration ran high at the inaugural Red Bull Training Grounds, which took place at Red Bull North America headquarters in Santa Monica. A high performance training event to prepare some of the world’s top eSports athletes for tournament competition, eight elite StarCraft II players from around the globe were invited to spend the weekend honing and perfecting their skills and analyzing the gameplay of their competitors, with over $8,000 in prizing on the line as well as expert on-site commentary from top eSports talent Sean “Day[9]” Plott, Mike “Husky” Lamond and Ben “MrBitter” Nichol.

Day one saw intense competition as the athletes settled back into a competitive tournament environment. In Group A, the favored StarTale player Bae “Sound” Sang Hwan dominated all comers including Manuel “Grubby” Schenkhuizen, while Canada’s Samuel “Kane” Morrissette had a strong showing as well, beating out teammate Dan "ViBE" Scherlong. In Group B, Korea’s Myeong Hwan “Golden” Jo of team StarTale came out on top of both Benjamin “DeMusliM” Baker and Brandon “puCK” Arlie Qual, while puCK was able to make a comeback against Kyeong Hyun “SeleCT” Ryoo to round out the day.

The players came back prepared for a day of competition on day two, knowing some would be forced into elimination leading into the finals. After a day of hard-fought matches and grueling, strategic battle, Sound and Kane emerged victorious from Group A, while DeMusliM and Golden advanced from Group B, setting up for an epic final day on Sunday. In the playoff round on day three, Sound was able to shut out DeMusliM with three straight victories in a best of five, while Golden advanced to the finals after winning three games to Kane’s one, setting up the championship round for a Korean powerhouse showdown between StarTale teammates Sound and Golden.

After three days of battle and over 20 hours of expert play and in-depth analysis for the pros and their fans tuning into the live digital broadcast, Zerg player Golden was able to topple Sound and emerge as the first ever Red Bull Training Grounds champion, taking home the an official trophy and $2,500 in prizing. All invited players will be getting together today for a wind tunnel skydiving group adventure before heading off to their next big tournament.