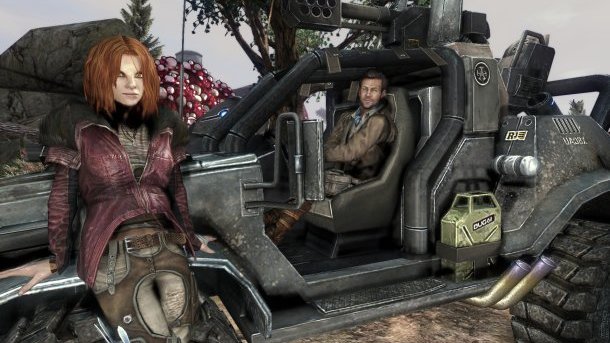 Syfy and Trion Worlds have launched a new contest that brings a gamer into the television world of Defiance, the online open world shooter and hit television series on Syfy. The Play the Game. Join the Show in-game contest pits players against the game’s Major Arkfall events to see who can rise to the top and become the ultimate Ark Hunter. The winner will have their in-game character appear on the second season of the Defiance TV series.

The ten Ark Hunters who complete the most Major Arkfall events between July 8 and July 30 will compete for a chance to have their character written onto the show. These ten semifinalists will be fleshed out with a backstory written by the show’s writing staff, which will be featured on Facebook, where Defiance fans will choose their five favorites. From this pool of five finalists, a member of the Defiance team will select the final winner to appear in season two of Defiance.

The Play the Game, Join the Show contest marks the second time that players have been invited to make their mark on the world of Defiance. Earlier in the year, Trion Worlds and Syfy ran the Most Wanted contest, which saw gamers competing to have their likeness included on wanted posters on an episode of the TV show.

To enter, players must register for the Play the Game, Join the Show contest at www.defiance.com/en/game-show-contest , then complete as many Major Arkfalls as possible between July 8 and July 30. Between August 12th and August 21st, one semifinalist backstory will be posted per day. Registered Facebook users can vote for the top five characters between August 26th and September 6th, and the final winner will be selected in September. Defiance season two premieres in 2014 on Syfy.