Scream For More Play: Zynga Kicks Off The Grand Opening Of CoasterVille 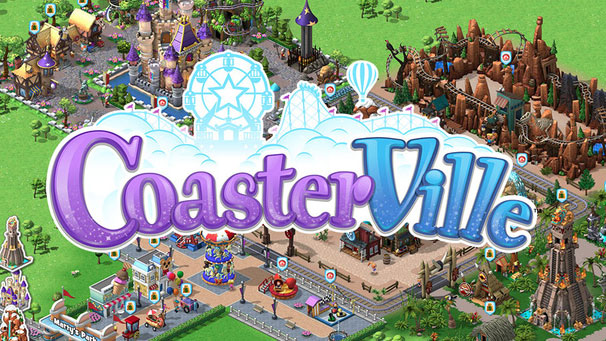 Zynga, the world's leading provider of social game services, today announced the global launch of CoasterVille, a fun new social game where players create their very own theme park, design exciting attractions, and share the thrill with friends. The game takes the joy of amusement park attractions and combines it with adventurous lands, quirky characters and new social features to bring players a world with endless possibilities. Developed by the Zynga Los Angeles studio, makers of the acclaimed Empires & Allies, the game marks the latest in Zynga's longstanding 'ville' genre.

"We want to take players on a magical and memorable ride in CoasterVille," said Amir Rahimi, general manager, CoasterVille. "Theme parks as a setting make for great games, but we sought to add our own twists through a mix of nostalgia and innovation that offers players fun ways to express themselves and play with their friends. We can't wait to see what players do with the endless amount of amusement park delights that we've added in CoasterVille."

In CoasterVille, players meet a colorful cast of characters who help them on their quest to build the greatest theme park the world has ever seen. As players dive deeper into the game, they'll find that their decisions determine whether guests have the best experience possible when visiting their theme park. The more thought that goes into placing coasters, restaurants, and service buildings, the quicker players can climb the ranks of the world's greatest theme park. Above all, quality customer service is a must as guests let players know, based on their decisions, when they're hungry, bored or even in need of a potty break.

CoasterVille lines up a list of fun features that include:

-- Thrilling Customizable Coasters -- Mix and match an endless assortment of game pieces and colors to create the coolest rides ever imagined. Whether you want to build the world's zaniest rollercoaster or fill your park with kid-friendly carousels, anything is possible.

-- No Two Parks Are Alike -- Personalize your unique park with your favorite themed lands like Fantasy Kingdom, Frontier, Lost Jungle and design special landmarks like hidden temples, majestic castles and other spectacular structures to attract and delight new friends.

-- Friends Matter -- Count on your friends to give you special access to unique resources. By visiting and lending a hand at a friends' themed land, you decide which items to collect in order to advance and expand. Coming soon, you will be able to create your own park Mascots who will tour friends' parks, introduce you to new friends, and help your park continue to grow.

-- Need for Speed -- Give your guests a screaming good time and "boost" rides to record speeds to score thrill points. Boosts should be used with caution: too much boosting can cause a ride to temporarily break down and guests to lose their lunch.

-- Amusing Advisors -- Learn the tricks of the trade from whimsical characters. Park curator Kelly teaches you the ropes while Marty, a mad genius specializing in gravity-defying rides, helps turn your creative vision into scream-worthy reality.