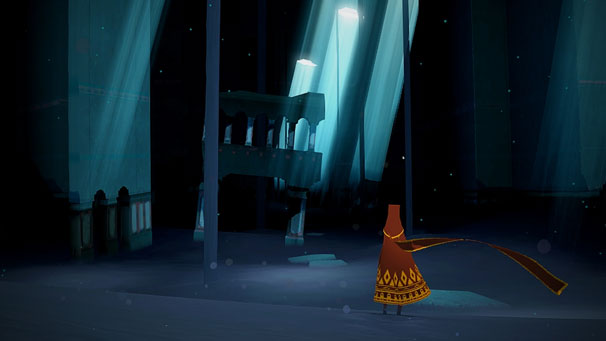 Composer Austin Wintory is nominated for the Grammy Award for Best Score Soundtrack for Visual Media for the video game Journey. Journey is the first video game score in history to be nominated for a Grammy Award. Wintory is nominated along with Academy Award winning composers John Williams (The Adventures Of Tintin - The Secret Of The Unicorn), Ludovic Bource (The Artist), Hans Zimmer (The Dark Knight Rises), Trent Reznor and Atticus Ross (The Girl With The Dragon Tattoo), and Howard Shore (Hugo). The Journey score album debuted this past April on the Billboard Charts higher than any previous videogame score ever has, and was the #1 on soundtrack on iTunes all over the world. Wintory is also nominated for Best Original Score and Best Original Song for Journey for the Spike Video Game Awards taking place on December 7, 2012 at 6:00PM on Spike TV.

Upon hearing the news of his Grammy nomination, Austin Wintory stated, "I really don't have words to describe how it feels. Every one of the other composers have produced works I love dearly, and above all John Williams is a lifelong idol. To be listed next to him doesn't feel real and I suspect never will."

Last night shortly after the Grammy nominations, Austin Wintory discovered his nomination through a familiar source. "I heard about the nomination the best possible way: from my dear friend and Grammy-trailblazer Chris Tin. Chris broke down walls for game music two years ago, and so it was absolutely beautiful that he happened to catch the news first and we spoke on the phone before I'd talked to anyone else."

Austin Wintory is hailed by The Hollywood Reporter as one of 15 composers “primed to take their place on the A-list.” The twenty- eight year old has already amassed over 300 composing credits including over 40 features, a dozen video games, and numerous concert works. Wintory’s works have been performed by orchestras and chamber ensembles around the US and Europe. His accolades include a BAFTA nomination for flOw, two Hollywood Music in Media Awards for “Best New Composer” and “Best Original Score, Mobile Video Game,” and the Game Audio Network Guild Award for “Rookie of the Year.” flOw was recently honored at the Smithsonian Museum this spring as part of The Art of Video Games exhibit. His most recent film, A Little Help, starring Jenna Fischer (The Office), won “Best Feature” at several film festivals. Wintory was also a featured panelist at the Game Developers Conference earlier this year in San Francisco discussing his score for Journey.

Other accolades for Wintory include the Fangoria Chainsaw Award nomination for “Best Original Score” for the Sundance hit Grace, which was also named one of Vision in Sound’s Top Ten Scores for 2009. The Sundance Audience Award winner Captain Abu Raed put Wintory on the short list as a contender for the Academy Awards for “Best Original Score.” He was also nominated by the International Film Music Critics Association for “Breakout Composer of the Year.”

Wintory also maintains a busy schedule writing concert music and composing/ producing albums. Beyond composing, he is a strong advocate for music in schools, particularly in early education. Austin Wintory is an active member on the Board of Directors for Education Through Music- Los Angeles.