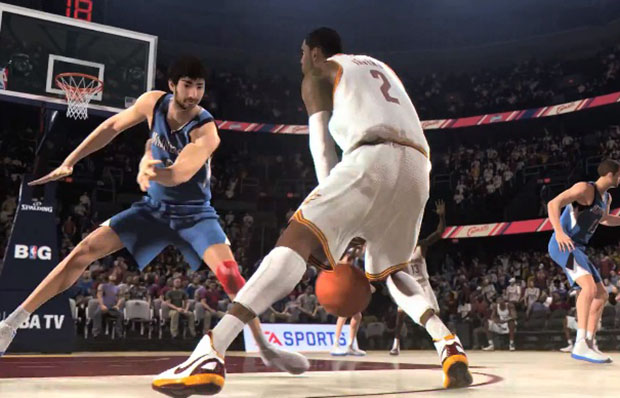 Electronic Arts has enlisted Cleveland Cavaliers NBA All-Star Kyrie Irving to be the cover athlete for NBA Live 14 for Xbox One and PlayStation 4. The first overall pick in the 2011 NBA Draft, Irving was named the 2011-12 NBA Rookie of the Year and was a unanimous choice to the 2012 NBA All-Rookie First Team. He was also named an NBA All-Star in 2013 and is the reigning Foot Locker Three-Point Shootout champion.

“I’m so proud to be the face of this franchise as it makes its much-anticipated return,” Irving said. “I’ve been on the court with the development team and I’ve seen first-hand some of the amazing things EA Sports is doing with NBA Live 14. The fans are going to love it.”

“We couldn’t imagine a better cover athlete for our game than the dynamic, explosive Kyrie Irving,” added Daryl Holt, VP and GM of Basketball for EA Sports. “Kyrie is one of the best ball handlers in the league, and with our next-generation technology we can arm players with the ability to replicate his impressive on-court feats, as well as the amazing signature styles and abilities of other pros in NBA Live 14.”

NBA Live 14 gives fans the chance to control the court with revolutionary new bounceTek ball physics, providing a level of control and precision never before seen in a basketball video game. Additionally, with the power of EA Sports IGNITE, NBA Live 14 will deliver True Player Motion, Human Intelligence and Living Worlds to the hardwood. More details on NBA Live 14, including information on game modes, features and more, will be coming soon.