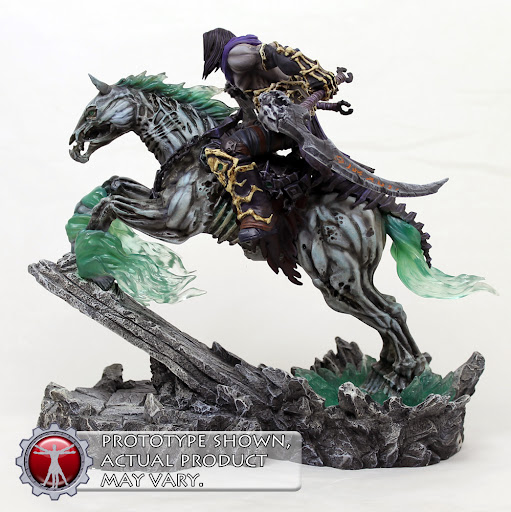 The toy and statue making company, Sota Toys, have crafted one based on the Darksiders franchise. The company stated that "Death is the iconic lead character in THQ's blockbuster post-apocalypse title Darksiders 2, released 2012. Darksiders follows the travels of our unlikely hero and the trail of his namesake that he leaves in his wake." Also, "The Death and Despair Statue takes the Resin Statue Multimedia experience to new levels. Lit internally by high-intensity LEDs, this exquisitely painted and molded statue will draw attention in the brightest day or darkest night.

The statue is lit by LED's which will show it off no matter where it is. The statue looks amazing isn't held up by needing batteries. It can be plugged in by AC adapter or it can plug into any USB port. Be nice if "no batteries" was the wave of the future. I highly doubt it though. This statue is slated for a first quarter of 2013 release so make sure to grab this bad-ass looking Darksiders icon.