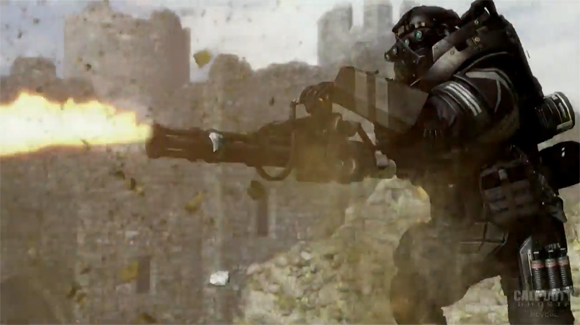 The next-generation of multiplayer gaming is here. Activision, developer Infinity Ward and Xbox gave fans worldwide a sneak peek into the all-new Call of Duty: Ghosts multiplayer, which delivers a new online experience, empowering fans with the greatest amount of customization, new ways to play, and access ever seen in franchise history. The new title features dynamic map events, new tactical player movements, a visually stunning world, an arsenal of new weapons, killstreaks, maps and game modes, and an all-new second screen experience along with the ability to transport your profile across console generations for the most complete gaming experience possible.

"Call of Duty: Ghosts continues the tradition of unrivaled gameplay and innovation that has made Call of Duty one of the most engaging entertainment experiences in the world played by more than 100 million fans," said Activision Publishing CEO Eric Hirshberg. "Call of Duty set the benchmark for the current gen and that's exactly what we're aiming to do for the next generation."

Call of Duty: Ghosts' customization includes the all-new Create-a-Soldier system, in which players can customize their various weapon loadouts, plus, for the first time in the series, the physical appearance of their soldier, delivering over 20,000 possible combinations, including heads, body types, equipment, gender, and more.

The customization in Call of Duty: Ghosts continues as players can not only Create-a-Soldier, but also create an entire squad of up to 10 unique soldiers which can be customized down to their appearance, perks, loadouts, and style of play. In addition, each custom squad member earns XP toward Prestige and can also be modified to specialize in various combat classes and across multiple game modes, allowing more flexibility and depth for gamers than ever before.

Players of all skill levels can take their squad of soldiers into Call of Duty: Ghosts' all-new third mode of play called Squads, where they can enlist to play solo, cooperatively up to 6-players, or competitively for one vs. one, head-on matches pitting players and their squads against others and their squads. Squads features a variety of play-types, allowing fans at any time to swap-out their custom A.I. soldiers with real friends for quick-action co-op. The competition can be fierce as squad soldiers display life-like, skilled tactics and behaviors like side-strafing, corner-camping, jump-shooting and more. Players, plus their squads, will earn XP, and if you're offline, be prepared as your squad may get challenged for play without you.

"This is the biggest overhaul of multiplayer since the original Call of Duty: Modern Warfare," said Mark Rubin, Executive Producer, Infinity Ward. "We're pouring our hearts and souls into making Call of Duty: Ghosts multiplayer the best it can be on next gen and current gen alike. With all the customization options, our new Create-a-Soldier system, dynamic map events, new perks and killstreaks, tactical player animations, new Squads mode, Clan support in-game and on second screen, it's the complete online experience."