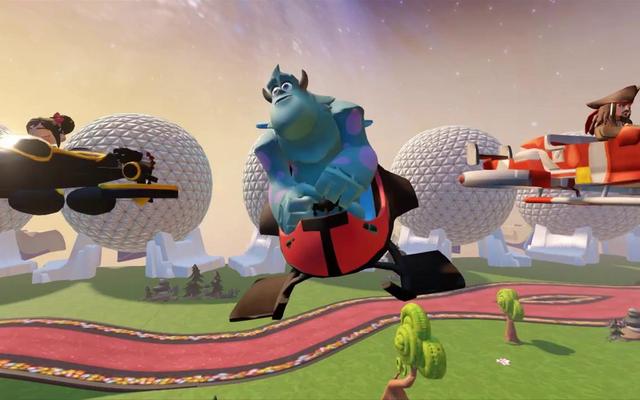 With Disney Infinity now in stores, the real magic behind the title is ready to come to life through new user-generated content (UGC) in the Toy Box mode, which gives gamers the ability to build their own unique adventures. To help get players started, Disney Interactive has released five brand new Toy Boxes for fans to download free of charge on Xbox 360, PlayStation 3 and Wii U including:

Wonderland Maze – Fall down the rabbit hole and fight through this Alice in Wonderland maze. Take on obstacles and enemies at every turn.

Medieval Arena - Transport to the Middle Ages and joust opponents on horseback -- or atop an elephant.

Tron Vs. Sugar Rush - Tron and Wreck-It Ralph collide. Challenge friends on a high speed race through The Grid and Sugar Rush.

Happiest Place - Experience the magic of this Disneyland recreation shown at the D23 Expo.

Floating Castle – Soar high above and take in the view. Rail grind up into a Floating Castle and battle friends for the throne in this royal Toy Box.

Players can download the new Toy Boxes by selecting Toy Box from the Disney Infinity Main Menu and then select Toy Box Share and Disney's Toy Boxes. Once there they will see a list of all the featured Toy Boxes and can choose one to download. They will be able to come back every week for new Toy Boxes. Players should also let us know what they want to see because Disney Infinity developers will soon begin creating content based on player suggestions.

Disney Infinity’s Toy Box is a combination of Disney-created and user-generated content, which is a wide-open space that gives players free range to create entire levels or worlds of their own. Players can upload their creation, onto Disney’s server and Disney will curate and release the best ones so all gamers can experience the magic.