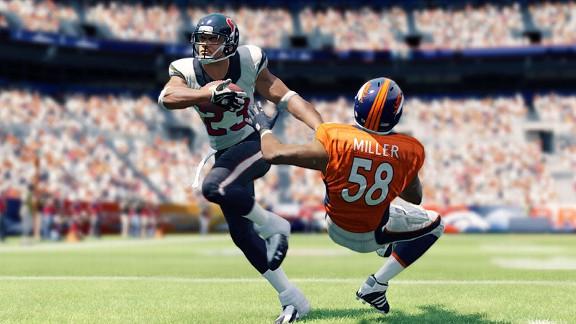 With the 25th anniversary of Madden upon us, social media research firm Fizziology found that 49% of the conversation around EA Sports Madden NFL 25 is positive with only 1% negative. Additionally, 23% of the organic conversation came from people playing the demo.

There have been 47,799 tweets in one week leading up to Tuesday's release (44% more than Saints Row IV at the same point in time). Of those tweets, 49% were positive and only 1% were negative, while 2% were mixed and 48% were neutral.

The free demo has been working, as 23% of organic conversation came from people playing the demo. In addition, 22% of organic chatter showed intent to purchase the game. Sixteen percent of organic buzz talked about specific players/teams and their rankings in the new version. Half of all negative and mixed mentions about the game complained of glitches in the demo.

Madden NFL 25 celebrates 25 years of innovation and unlocks the power, precision, and creativity of the NFL ball carrier.  Whether you’re a slashing running back, dual-threat QB, or ball-hawking safety, fans will be able unleash 30 new moves and string together devastating combos with the all-new precision modifier.

Year two of the Infinity Engine brings both a more polished physics simulation and introduces the all-new Force Impact System.  Power moves including the Hit Stick, trucking, dive tackle and stiff-arm have been completely redesigned to harness the full potential of Infinity Engine 2, giving you more control over the outcome of a play than ever before.