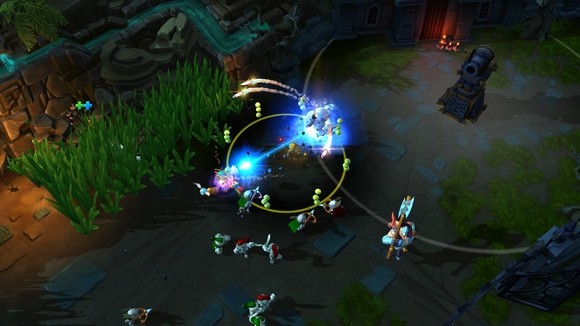 S2 Games, developers of the free-to-play Multiplayer Online Battle Arena (MOBA) Heroes of Newerth, will be revealing their new MOBA, Strife, to the public for the first time at this year’s PAX Prime expo in Seattle. From August 30 – September 2, Strife will be available to play and team members from S2 will be conducting demos of the game at booth #352 in the main hall. Monday, Sept. 2 will feature special guest, Teenage Mutant Ninja Turtles co-creator, Kevin Eastman who will reveal an exclusive preview of the Strife comic he and S2 have been working on. Eastman will be available for a signing and to answer questions.

Along with the playable game, the booth will feature behind-the-scene looks at Strife’s development, with live Q&A’s, discussions, and presentations each day of the show. There will also be plenty of giveaways for those who stop by, including exclusive preview versions of the comic.

For show-goers who want to spend more time with Strife, they should plan to visit The Strife Lounge at the Daily Grill located across the street from the convention center. While there, they’ll be able to take advantage of a special 20% off select Daily Grill offerings all-day. Fans should also mark their calendar for a special VIP event Sunday night at the Daily Grill and follow @S2Strife on Twitter for more details.

S2’s first MOBA, Heroes of Newerth, has a remarkable 15 million installs and over 2.5 million current registered players and the company is now ready to further evolve the genre with their new game, Strife. Refusing to be constrained by typical MOBA genre norms, S2 instead focused their knowledge and industry experience on a collaborative, engaging, enjoyable team PvP experience. Strife offers a rich experience that rewards everyone on the team for their role in victory. Strife will be available this winter, promising a realm of conflict, competition and glory.

S2 Games is a game publisher and developer with a mission to identify, develop, evolve and unleash the future of online multiplayer games. Since its inception in 2003, S2 has been focused on driving innovation into the global online game space, through identifying and solving industry issues, listening closely to its passionate gamer base and incorporating features that gamers truly want.