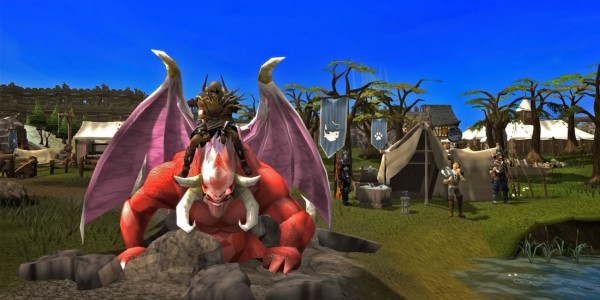 Jagex has revealed key statistics the RuneScape 3 launch. Following the launch of the free-to-play online game, players have flocked to join the game which allows them to forge their own gaming experience and shape the world around them. Over the past 30 days the game has had well over 300,000 new players start their RuneScape adventure and over 100,000 former players re-activate their accounts. In total these new, existing and returning players have seen on average 600,000 hours of gameplay being played per day – which is the equivalent of 68 years of gameplay taking place daily.

RuneScape 3 launched on 22nd July with the Battle of Lumbridge; an event which spans two months centred around the conflict between two of the gods who have returned to RuneScape.  Players have been pledging their allegiance to these gods through the collection of Divine Tears – the residual life force of the now deceased god, Guthix, whose death has heralded the start of the 6th Age. Since the Battle of Lumbridge has begun players have collected over 1 billion Divine Tears and have killed over 60 million enemy soldiers.

“With the Battle of Lumbridge we were looking to give the players a new way to interact with RuneScape and place their mark on the world,” said Phil Mansell, RuneScape Executive Producer. “We’ve seen over a 150 million votes cast on how the battle campaign should be fought, with players making decision on everything from what kind of reinforcements they get to how they can support their chosen god with buffs and new units. Players have so many ways to affect the current battle, from killing enemies or donating resources to their chosen deity, and it is this player driven dynamic which puts the future of the game very firmly in the players’ hands.”

Jagex has continued to add content to the game, giving players  something new to try and to master every week, including a brand new quest  - The Death of Chivalry, as well as a new 6th Age skill – Divination.

“RuneScape 3 has been the result of the tireless efforts of the development team and the positive reaction from the community, since its launch, shows how aligned they are with the community spirit and sentiment,” said Mark Gerhard, Jagex CEO. “This is the first step in allowing players to truly create their own adventure within the game and we’re really excited about seeing how the game evolves through their participation.”