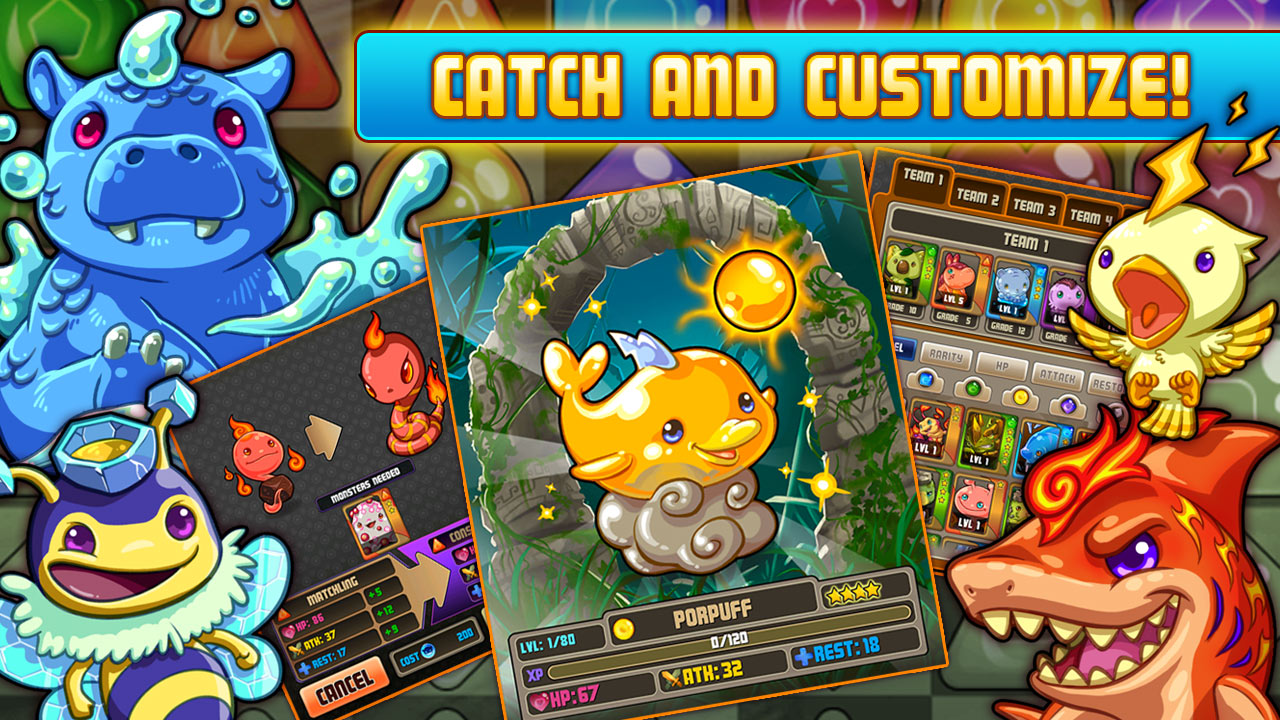 One of the up and coming mobile games that looks interesting to me is Monster Match. It could be concidered Pokemon for mobile but there is so much more to it than that. Monster Match combines the strategy apspect of a puzzle game and the adventure/monster training of an RPG game. Puzzle and RPG game sounds like two areas of game play I want more of. Please allow me to welcome Roger Royce, Product Leader for Monster Match to GamerHub.TV

How long have you been in the business? (Game development)

After getting my start in the toy industry, I transitioned into mobile gaming about 3.5 years ago. I have a background in art and animation, but working with toys taught me to blend these skills with game design. Today, I’m a Producer at DeNA, developing 1st party games.

Is it tough to develop a mobile game?

There are definitely some technical limitations when developing a game on a mobile device but the real challenge comes from maximizing the device’s strengths without coming across as gimmicky or forced. At DeNA, game designers focus game play around bite-sized sessions that naturally fit into players’ daily lives, whether it be waiting for a bus or getting in “one last round” before going to sleep at night. Our real challenge is making sure our players swap feelings of “I’m bored” with “I’m delighted!”

I read that you feel the “pick up and play” factor is geared more toward casual players. Do you go into the development thinking this is who we’re making this for and then change mid-development?

With our latest game, “Monster Match,” we maintained a consistent target audience throughout our entire development. Considering so many games in our catalogue at the time focused on more niche audiences, we set out to present both a visual and game play style that would be super approachable to all players. This effort was constantly guided by the team’s mantra of “surface the causal and embed the hardcore.”

By adhering to this approach, “Monster Match” can easily be picked up and played by anyone but it’s also got great depth for those players that seek it out. One example of this depth would be our targeting system in battle. We purposely avoid teaching it during the tutorial to avoid overloading casual players but more advanced players will utilize this feature to more strategically defeat enemies, necessary in more challenging puzzle stages.

Is there a game out now that you could compare Monster Match to? The obvious comparison would be Pokemon. What do you say to convince people that it isn’t just another Pokemon clone?

For the record, I’m a huge Pokémon fan, having grown up during the original release of Blue/Red. That game is the original “monster catcher,” and we owe a lot of inspiration to Game Freak and Nintendo. However, I’ve been disappointed in the many attempted clones over the years. They feel cheap because they are just trying to copy Pokémon instead of evolving.

With “Monster Match” we spent a great deal of pre production creating an art style that both pays homage but also stands on its own two feet (or four feet, as with some of our monsters). Additionally, the game play is very different since it is a mash up of puzzle and role-playing game. Because of this, it’s probably more accurate to compare “Monster Match” to “Puzzle Quest,” “Super Puzzle Fighter,” “Dungeon Raid,” or “Puzzle and Dragons,” all of which inspired our development.

Did you always know this (development) was what you wanted to do, job-wise?

At a young age, I was always drawing and making flipbooks. When I got a little older I also became interested in video production. Then in high school I started teaching myself software like Photoshop and Flash so I could combine all of these interests to make my own amateur games. I’ve always known I wanted a career in game development and each day I’m grateful to be working in this industry.

Is there a moment when you felt you had arrived on the gaming scene?

Unlike Hollywood, the gaming industry has fewer known “stars” and defining public moments that showcase its talent. Many of us pour our souls into these games, but our names and faces will never be known. However, I prefer it this way. When our efforts can bring smiles to faces then that is how I define “arriving on the gaming scene.” Making a positive connection with a player is the ultimate reward.

Is it easier or harder to develop for a “free-to-play” game?

When you first start to develop a mobile game, you can’t consider if it’s going to be freemium or premium. At DeNA, we simply try to focus on positive enforcing game loops and fun player experiences first and then consider how we’re going to feed ourselves and put a roof over our heads later. That said, I would admit it’s tougher to develop “free-to-play” games for a few reasons. First, players just expect more. All competing developers are locked in a content war and the concept for “free content” has become so swollen that anything less than regular updates receives criticism from players.

This demand has resulted in post-launch resourcing plans across our industry to live support freemium games. Additionally, “free-to-play” games always run the risk of being called “pay to win” when micro transactions and IAP are added. Creating a game balance in a world where some players will spend money and others will not is a tricky tightrope to walk.