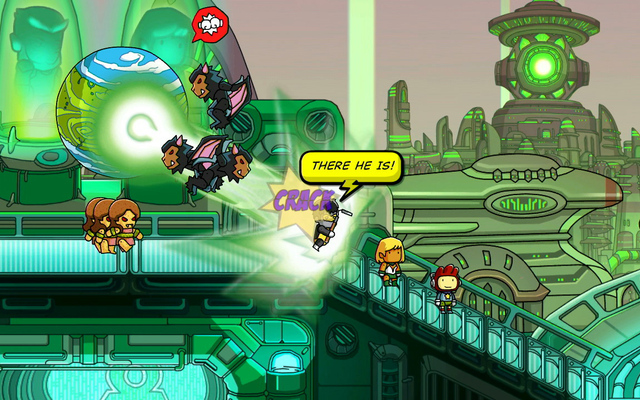 Warner Bros. Interactive Entertainment and DC Entertainment have launched Scribblenauts Unmasked: A DC Comics Adventure. The new game melds the boundless creativity of the award-winning video game franchise with thousands of DC Comics characters and objects across the DC Comics universe - all drawn in the classic Scribblenauts art style. Created and developed by 5TH Cell, the game is now available for the Wii U system, Nintendo 3DS hand-held system and PC through digital on Steam.

Scribblenauts Unmasked features a story where protagonist Maxwell embarks on an imaginative and comical quest through GOTHAM CITY, METROPOLIS, ATLANTIS and other iconic locales from the DC Comics Universe. In the game, Maxwell comes to the aid of BATMAN, SUPERMAN and the rest of THE JUSTICE LEAGUE as they face the mightiest DC Comics Super Villains, such as THE JOKER, LEX LUTHOR and SINESTRO.  Fueled by the player’s imagination where anything he/she writes comes to life, Maxwell must use his magic notebook to summon heroes or tools that will put a stop to the villains' evil schemes and save the DC Comics universe.

Players in need of some super hero help or who just want to learn more about the vast DC Comics universe itself, can reference a brand new feature exclusive to Scribblenauts Unmasked.  The Batcomputer! The Batcomputer is an in-game encyclopedia that visually displays the names and descriptions of every DC Comics character and that can be used in the game.  It also links these characters and objects together in the form of a detailed wiki that can be used to learn about and utilize some of the most interesting and obscure characters in the DC Comics universe.

“The Batcomputer in Scribblenauts Unmasked is one of the most comprehensive resource for DC Comics knowledge ever created in a retail product,” said Samantha Ryan, Senior Vice President, Production and Development, Warner Bros. Interactive Entertainment.  “Players looking for the perfect object to summon will have fun finding familiar characters or discovering lesser known ones to enhance their gameplay experience.”