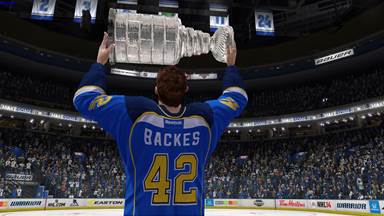 A simulation run by EA Sports NHL 14 predicts that Alex Pietrangelo will lead the St. Louis  Blues to their first ever Stanley Cup Championship in the team’s 47-year history. The Blues will finish second in the Central Division and third overall in the Western Conference with 99 points. Pietrangelo will be awarded the Conn Smythe Trophy as the Blues upset Sidney Crosby and the Pittsburgh Penguins to take the series 4-2 in the 2014 Stanley Cup Final.

“The St. Louis Blues are the personification of NHL 14,” Sean Ramjagsingh, NHL 14 Producer. “They’re tough, fast and have one of the deepest lineups in the League, making them a favorite to finish on top this season.”

Other notable team storylines include:

The Chicago Blackhawks will take home the Presidents’ Trophy with 108 points, only to be ousted by the Blues in the Conference Finals.

The Edmonton Oilers will finally edge their way into the Stanley Cup Playoffs by taking the fourth seed in the Pacific Division, breaking their seven-year playoff drought, which was the longest active streak in the NHL.

The final battle for playoff position will be especially heated in the West, with only one point separating fifth place, San Jose Sharks and the eighth place, Edmonton Oilers.