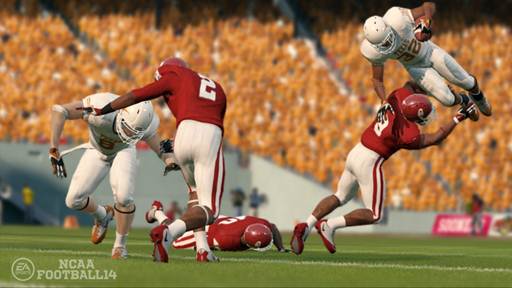 At the end of the day, it’s gamers that are the real losers in the multiple lawsuits against the NCAA and EA Sports. Without the ability to license the NCAA brand or any of the conferences, Electronic Arts has stepped out of the college football game. NCAA Football 14 is now the last college football game anyone will be playing.

“In light of the ongoing dispute between the NCAA and student-athletes and to limit its potential liability in the dispute, EA has decided to discontinue producing its annual NCAA Football title,” wrote Arvind Bhatia, video game analyst at Sterne Agee. “Simultaneously, EA has settled its pending 2009 lawsuit with student-athletes. In terms of the financial impact, historically, this franchise has generated annual unit sales of about 2 million units or  about $100 million for EA. While this is an important annual franchise, its margins are below corporate average due to the significant royalty payments involved.”

But unlike NCAA Basketball, analysts believe there could be a return to the college game down the line.

“In the future, if the NCAA is able to resolve its dispute with student players, we expect EA will revive the franchise,” said Brett Strauser, video game analyst at Sterne Agee.