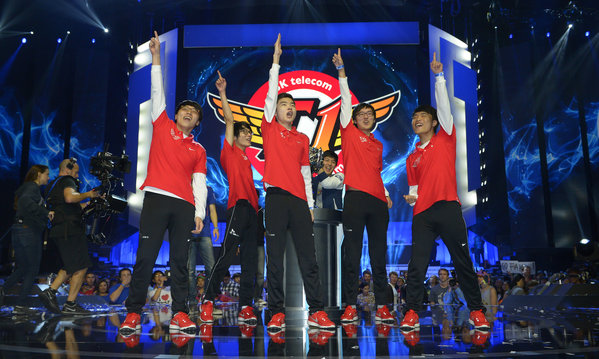 Azubu, providers of the online broadcasting service Azubu.tv, streamed the League of Legends World Championship final live from the sold out Staples Center in Los Angeles, Azubu.tv and facebook.com/AzubuMedia, which saw South Korea’s SK Telecom T1 sweep China’s Royal Club 3-0. The company has plans to grow its footprint in the burgeoning eSports arena.

Gaming industry veteran and Azubu CEO Ian Sharpe took over the helm last month and has quickly assembled a global team with decades of experience from Electronic Arts, Capcom, IBM and MIT to help accelerate the company’s goal of bringing eSports to a wider audience.

“At Azubu we offer seamless game streaming, but that’s just the tip of the iceberg,” said Sharpe. “We’re also introducing talented young players, providing insightful commentary and broadening eSports-awareness at the corporate and consumer levels. Many exciting channels and changes will be delivered over the next few months.” Azubu.tv utilizes Brightcove’s premier Video Cloud Live streaming technology to ensure fans can rely on crystal-clear live streaming of their favorite events.

With their ‘By Players, For Players’ motto, Azubu’s goal is to revolutionize the way people watch, play and participate in eSports. The tremendous growth of eSports can’t be overstated: in 2012, over 100 million active players competed in tournaments worldwide for a chance to win a share of over $15 million in prize money.

In addition to the Championship Series itself, Azubu sponsors professional teams such as Counter Logic Gaming (CLG) and Taipei Assassins to help nurture and support the growth of eSports across the globe.

Azubu was established in 2011 and is backed by private equity firm Sapinda (who recently created the Sapinda Rainbow project to raise $20 million dollars to fund Nelson Mandela's dream of a world-class children's hospital in South Africa).  Azubu is a global media company with offices in Berlin, Seoul and Los Angeles that offers users the ability to watch live and on-demand from the biggest e-sports events happening around the world.