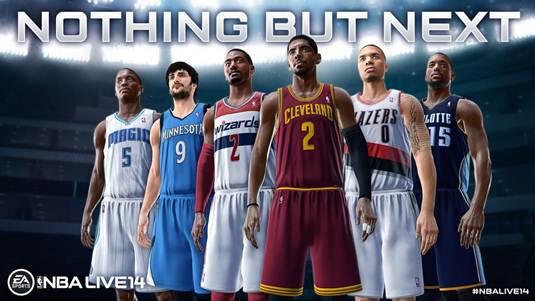 EA Sports has been pretty disappointing lately with their handle on the NBA Live series. The NBA Live series couldn't live up to its claim to fame back in the 90s and early 2000s as it was the first basketball title to feature actual simulation gameplay along with an exciting arcade like style with real NBA players. In the past decade the gameplay went noticeably down and the visuals took a hit that seemed to feature plastic figures ice skating on a basketball court. To make things worse, EA kept delaying the game repeatedly starting from a few years ago making hardcore fans of the series lose interest.

Will NBA Live 14 be a good basketball game this time? How will the graphics look like on NBA Live 14 on the PS4 and Xbox One? While I personally don't have the answers to these questions, I can tell you one thing is that EA Sports are investing a lot of time and resources to make things really good again. EA Sports announced its new NBA Live roster that includes future NBA Starts (including current ones too) such as Kryie Irving, Damian Lillard, Ricky Rubio, Kemba Walker, John Wall and surprisingly rookie Victor Oladipo (who looked great during preseason.)

EA Sports has taken these star players and have worked diligently with them in the past several months playing an integral role in the creation of NBA Live 14.The players have been involved in motion capture to capture their unique signature moves, head scans, facial performance sessions, development consultation and more. Could this be enough to save the NBA Live series once and for all? We will soon find out later this year as NBA Live 14 launches on November 19 in North America and in the worldwide onNovember 22 for Xbox One and November 29 for PlayStation 4.

“The time, access and feedback these athletes have provided has been invaluable,” said NBA Live 14 Executive Producer Sean O’Brien. “We’ve been able to capture signature moves and unique styles through mocap sessions, and their willingness to provide open and honest feedback has helped us do so much more with the game in year one than we ever could have achieved without them.”