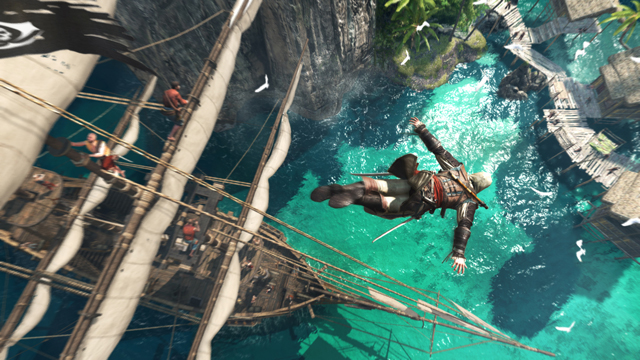 Approaching 60 million copies sold worldwide, Ubisoft’s Assassin’s Creed franchise shows no signs of slowdown. The time-traveling saga has set its sights on the 18th Century Caribbean this year with Assassin’s Creed IV: Black Flag. It promises to be the largest open world Assassin’s Creed game to date. This year also marks the debut of the franchise on next gen consoles PlayStation 4 and Xbox One. Creative Director Jean Guesdon explores the pirates of the Caribbean in this exclusive interview.

Why did you choose this time period for Assassin’s Creed IV?

Back in 2011, we decided to create Assassin’s Creed IV: Black Flag based on the first iterations of the naval segments of Assassin’s Creed III that were under production at that time. We realized that there was an incredible potential with this technology (technical feasibility) and we wanted more of it, ideally using piracy as a setting (team’s desire). Because we’re Assassin’s Creed, we didn’t want to treat it in a very cliché or kiddy treatment. Everything was perfectly aligned to start the development of ACIV: Black Flag.

What has next gen technology opened up to you to bring this world of pirates to life?

The next gen technology really allowed us to push the visuals and the immersion. The power of the hardware is incredible and showcases the immense talent of our artists like never before. Especially for this game and its gigantic naval open world, this power has been put to good use. We have a lot of natural environments like jungles, beaches and plantations, where the vegetation will be amazingly reactive and provide real gameplay feedback. We obviously have all the naval aspects of the game, starting with the ocean simulation, the clouds, the rain, and the smoke of dozens of cannons firing together.