GDC Next And App Developers Conference Has Strong Start 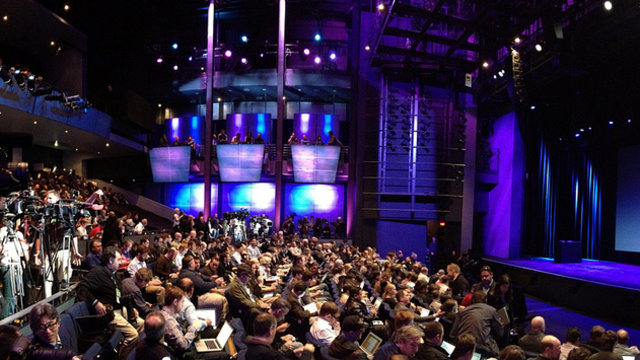 Both ADC and GDC Next brought their respective industries’ leaders together to share best practices and help developers fine-tune their crafts by providing valuable insights on the future of digital interactivity.

Together the conferences welcomed more than 170 speakers across more than 150 sessions from influential and distinguished companies within the app, game and entertainment industries. Talks at ADC included those given by speakers from Evernote, Netflix, Pandora, Tumblr and more, while GDC Next featured talks by Double Fine Productions, Google, Microsoft, NBC Universal, OUYA, thatgamecompany, Ubisoft, Walt Disney Imagineering and several others.

In addition, the combined Expo Floor featured more than 80 of the top game and app companies as exhibitors and sponsors, including Google, Sony, Microsoft, Oculus VR, Samsung, Intel, Qualcomm and more. The Expo Floor also hosted the ADC Best in Apps contest which was presented by way of a partnership with AppCircus, the unique global traveling showcase of the most innovative and creative apps.  Sixteen finalists presented their apps to a panel of industry leaders and one winner was selected in each of four categories.  Each winner was awarded a nomination for the prestigious Mobile Premier Awards, held by AppCircus during Mobile World Congress in Barcelona in early 2014.

Hot topics discussed at GDC Next included the rise and evolution of e-Sports, funding options for indie game developers, the value of live player feedback, and how current emerging tech trends will be mashed up for even more creative potential, among others.  Subject matter for ADC covered multi-screen and multi-platform app design, new opportunities with wearable technology, monetization in emerging markets, unique app design opportunities with sensors on mobile devices, and many more.

Special to GDC Next, the show organizers honored ten innovative, yet-to-debut games as the GDC Next 10.  Game designers from each of the GDC Next 10 games revealed their inspiration behind their titles to attendees. The games chosen as the GDC Next 10 were: Broken Age, Counterspy, D4, Doki Doki Universe, Project Eternity, Project Spark, Storyteller, Super Time Force, Supernauts and Wayward Manor.

As a part of the conference organizers’ dedication to game development advocacy, GDC Next welcomed Women In Games International (WIGI) and Girl Scouts of Greater Los Angeles (GSGLA) to give a special panel presentation regarding updates on a new patch program that will introduce, educate and excite girls about video game creation. WIGI and GSGLA have been working hard behind the scenes to begin rolling out a series of workshops for Girl Scout Juniors (grades 4-5) throughout greater Los Angeles. WIGI will initiate parts of the patch program with girls on Nov. 9 at Girltopia, GSGLA’s huge girlpower event also at the LA Convention Center.

“We’re thrilled to have launched two brand new conferences and to have offered attendees quality content that not only provides key learnings in game and app development but also inspires one another to raise the bar in the creation process.” said Meggan Scavio, General Manager of the Game Developers Conference events. “The feedback from ADC and GDC Next attendees has been great and we look forward to returning next year with even bigger and better conferences.”