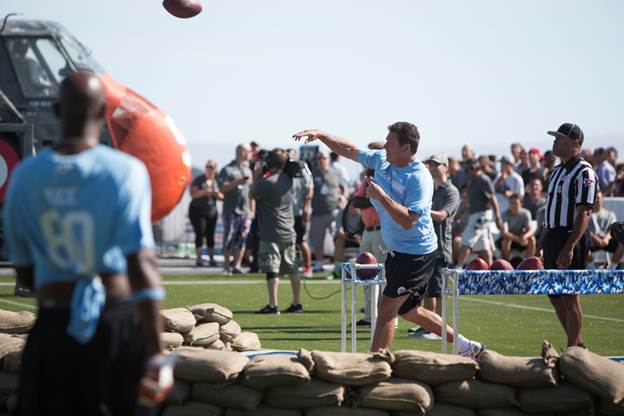 Video games tackle the real world in the Madden NFL 25 Skills Challenge Powered by GameStop, which airs this week. Fans can check out all the action Wednesday, November 13 and Tuesday, November 19 at 7pm EST on ESPN2 as Hall of Fame players such as Deion Sanders, Jerry Rice, Troy Aikman and more undertake a series of challenges to prove whose still got it. Dan Marino talks about Madden in this exclusive interview.

This year’s Skills Challenge took place on the USS Midway Museum, a retired US Navy aircraft carrier docked in San Diego. The participants competed in five different events testing all facets of their game, proving who’s the strongest, has the best hands and who has the speed and elusiveness to best the Under Armour Obstacle Course.

As a part of the NFL Salute to Service month, each team of legends hosted a Navy sailor as an honorary teammate. Fans in attendance were also rewarded, taking home a copy of Madden NFL 25 on Xbox One, giving them their first taste of next-gen gaming.

Madden NFL 25 launches on PlayStation 4 November 15 and Xbox One on November 22. The game is also available on PS3, Xbox 360 and iOS and Android devices.