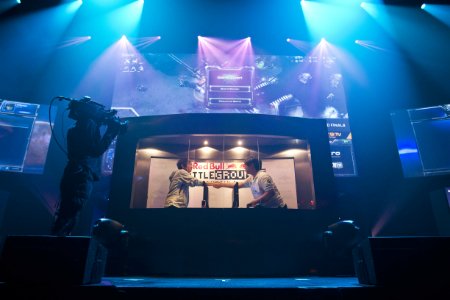 NVIDIA will serve as the official graphics partner for Red Bull Battle Grounds, a marquee Star Craft II competition taking place November 23-24, 2013 at the Hammerstein Ballroom in New York City. Through this new partnership with Red Bull, NVIDIA will provide its groundbreaking technology G-SYNC and Shadowplay for the tournament, and on an on-going basis, by providing the world’s most advanced gaming technology for Red Bull eSports events.

For hardcore gamers, GeForce GTX is all about delivering a pure gaming experience that is fast, quiet and cool. With the addition of the new G-SYNC technology, gamers can now experience a superior way to game. G-SYNC-enabled monitors offer players a true competitive advantage by providing smoother, sharper on-screen images with faster, more accurate response times for enhanced in-game action, but do so without introducing tearing or the dreaded input lag, the bane of gamers everywhere.

A must-have for pro-gamers everywhere, Shadowplay is NVIDIA’s fast, free and easy-to-use new approach to gameplay recording. Utilizing an on-board encoder built into GeForce GTX 600 and 700 Series graphics cards, it’s an advanced capture tool that shadows every in-game move, making uploading gameplay easier than ever. In addition to the players competing in the tournament, event spectators will have a chance to try G-SYNC and Shadowplay technologies for themselves at the NVIDIA booth located in the main room of the Red Bull Battle Grounds event.