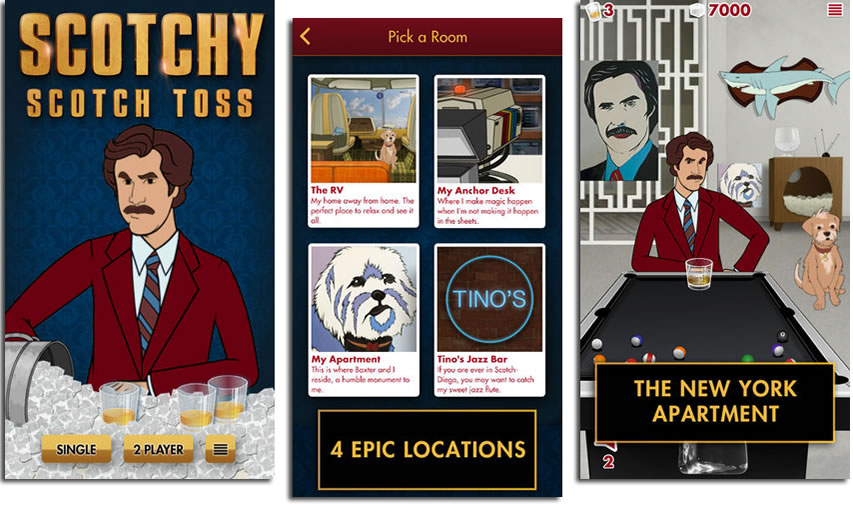 Prepare for your newest mobile game obsession: Scotchy Scotch Toss, a mobile game of deception, intrigue and ice.  Paramount Pictures has released the game in advance of its eagerly awaited upcoming comedy Anchorman 2: The Legend Continues, in theaters December 18. James Marsden talks about Anchorman 2 and gaming in the exclusive interview below.

Created by Funny Or Die, Scotchy Scotch Toss has players toss ice cubes into Ron Burgundy’s glass to win points and hang out with San Diego’s legendary anchorman. The casual mobile game lets you play one-on-one against Ron Burgundy or challenge your friends. Ron will congratulate or berate players with 300 new one-liners, voiced by Will Ferrell and scripted by Funny Or Die. Using simple swipe-to-toss gameplay, Scotchy Scotch Toss is easy and fun for everyone.

Play in Ron’s favorite jazz bar or in locations from the new film, such as Ron’s RV, the Channel 4 News desk, and Ron’s New York apartment. Discover what happens you when hit special targets like an aquarium of scorpions, cocktail waitresses and Ron’s trusty dog Baxter.

“We are very excited to bring Ron Burgundy and his relentless witticisms to mobile devices for the first time,” said Megan Wahtera, Senior Vice President of Interactive Marketing at Paramount Pictures. “Through a collaboration with Will Ferrell and Funny Or Die, fans are able to get their daily fix of Ron Burgundy anytime, anywhere.”