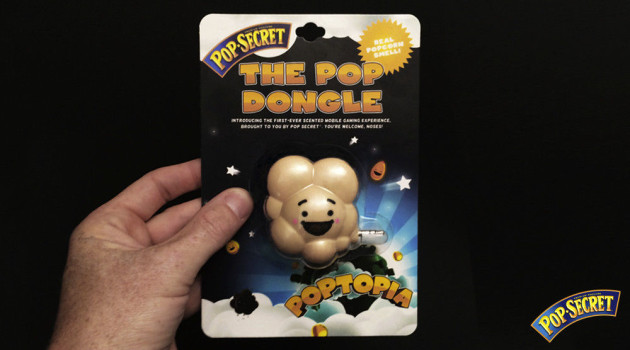 For years, technology has attempted to enhance the video game experience through aromas. The idea of smell-o-vision has now become a reality, for better or worse. In addition to being able to hear enemies sneak across your living room with Dolby 7.1 Surround Sound, you may soon be able to smell them coming.

Gamers who download the new free-to-play iPhone and iPod touch game, PopTopia, can smell real popcorn during the game if they bid on Pop Dongles created by Deutsch LA. The hard-to-find devices are being used to raise money for the American Red Cross through eBay auctions at http://www.ebay.com/itm/221336551427.

Gameplay challenges players try to pop as many popcorn kernels as possible to please the giant mouth on the screen. Every time players successfully swipe the butter in the game, the Pop Dongle sends out a popcorn scented spritz. In technical terms, the dongle plugs into the device’s audio jack and the game emits a sub-audible frequency that tells the Pop Dongle to release the scent. The Pop Dongle comes with a payload of between 500 and 1,000 sprays of popcorn scent.

While this is the first mobile application of smelly games, it’s not the only option for nosy gamers. Scent Sciences is developing the $70 ScentScape device, which plugs into the computer’s USB port. The device will ship with 20 pre-loaded smells and each scent cartridge will last approximately 200 hours. This technology for the PC and Mac will allow game developers to use any of these smells and even mix and match to create their own, tying things directly into PC games. There’s a volume control feature so gamers can turn down the fumes.

Another option now in development in Japan is the “smelling screen,” which was on display at the IEEE Virtual Reality 2013 conference in Orlando, Florida. Developed at the Tokyo University of Agriculture and Technology in Japan, the prototype screen features four fans that can blow odor vapor from anywhere on the screen. In the future, this would allow game developers to target specific areas of the screen with different smells like a burnt out building and the aroma of gunpowder in a shooter.

While many gamers likely think the gimmicky nature of smell-o-vision “stinks,” technology is getting to a point with the visual fidelity of 1080p graphics and 7.1 surround sound that companies are looking for what’s next. 3D gaming failed to take off with stereoscopic glasses, but at CES 2014 autostereoscopic (glasses free) displays will be on display and available at more affordable prices. So the gimmicky nature of 3D games could become mainstream in the not-too-distant future.