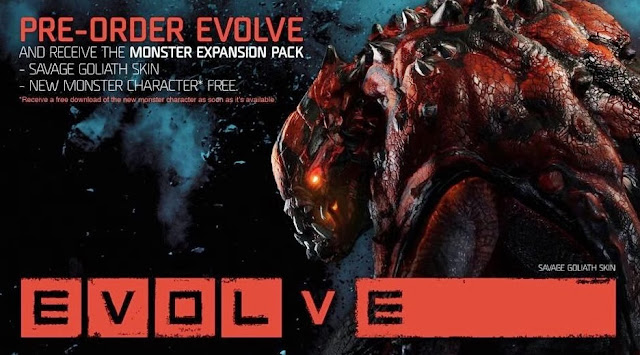 Exactly one week after it was initially revealed to the world via Game Informer’s new cover reveal, publisher 2K and developer Turtle Rock Studios’ new game Evolve is already available for pre-order with a pre-order bonus lined up as well.

In case you haven’t heard the details yet, Evolve is a new multiplayer-focused game that aims to blend cooperative and competitive elements into a single cohesive experience. A typical “match” in Evolve will have five players total; four playing as a team of human “hunters” armed with a variety of sci-fi weaponry and special skills, and the fifth player as one of a variety of different alien monsters that starts off on roughly equal footing in terms of power but can quickly “evolve” by consuming an area’s local wildlife, growing into a gargantuan creature with its own set of unique powers and attacks.

So far only one of the game’s playable monsters, the brutish Goliath, has been revealed and fans who pre-order the game will receive the exclusive Monster Expansion Pack which contains a special “Savage” skin for the Goliath as well as an as-yet-announced new monster which will be available at some point following the game’s launch. No further details could be confirmed but my guess is that pre-ordering the game will merely grant free access to the skin and monster with both eventually becoming available as DLC purchases.

Evolve is set to be released sometime in Fall, 2014 for Xbox One, PlayStation 4, and PC.