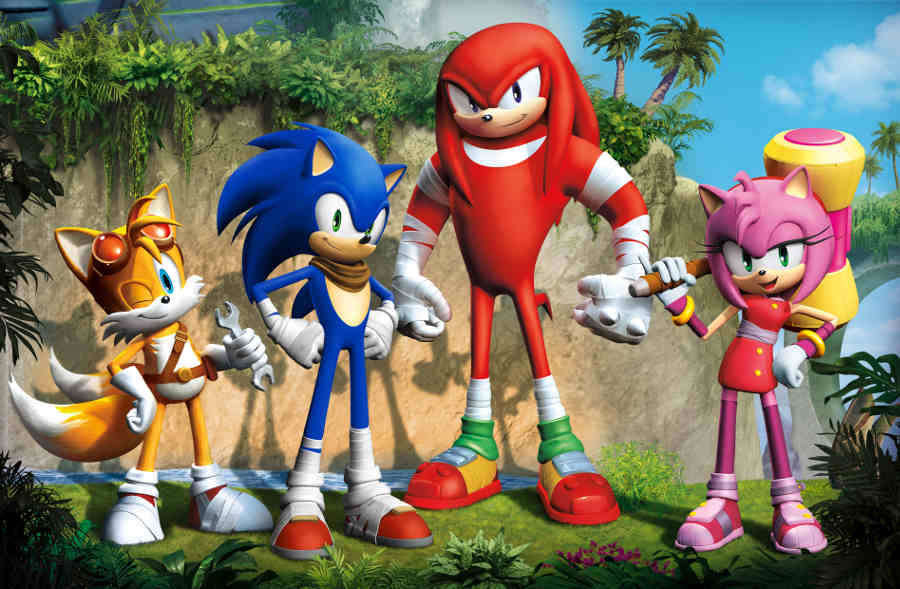 For over two decades, Sonic the Hedgehog has been one of the world’s most successful video game icons. The little blue guy has over 70 games, four animated series, and an extensive global merchandising line to his name. In 2014, Sega will introduce a new branch of the Sonic universe, entitled Sonic Boom, that will debut a new look for Sonic and friends and launch their first-ever CG animated television series, new video games for the Wii U system and the Nintendo 3DS hand-held system and a new toy line.

Stephen Frost, producer of the Sonic Boom games at Sega, is working closely with the developers, as well as the other creatives involved in this multimedia endeavor.

“I play sort a lot of games so I see inspiration everywhere, but really where it mostly came from for this project was my experiences playing classic Sonic games,” said Frost. “I’m a huge Sonic fan and there are things that I’d love to see like playing as other characters. I wanted to explore more of this Sonic’s world. I love the speed stuff, but every one of these level designers spent so much time building so much content and you’re going by it so fast. I want fans to really be able to slow down for a little bit, look at this world, look at the history of this world, and all the things that formed it. I wanted to build up this story and this world in that regard. I also draw a lot from what fans tell us. I think fans are always tough to predict with what they’ll like, but I think that bringing the other characters to the forefront is a key aspect of it.”

The creative driving forces behind these projects are working together with Sega to kick-start a global campaign for Sonic Boom that they hope will connect with existing fans across a variety of platforms and attract new ones.

Sonic Boom’s visual identity includes character designs inspired by the abilities and unique personalities of each of the characters while still maintaining the core identity and values of the Sonic brand.  The rich worlds of the TV series and video game will share a common narrative and a number of location and stylistic similarities reflecting full collaboration between videogame, TV series partners and Sega from the outset.

Frost said what it started out with was working with the animation team to explore why this new world is here, how it functions, who the residents are and what the history is. 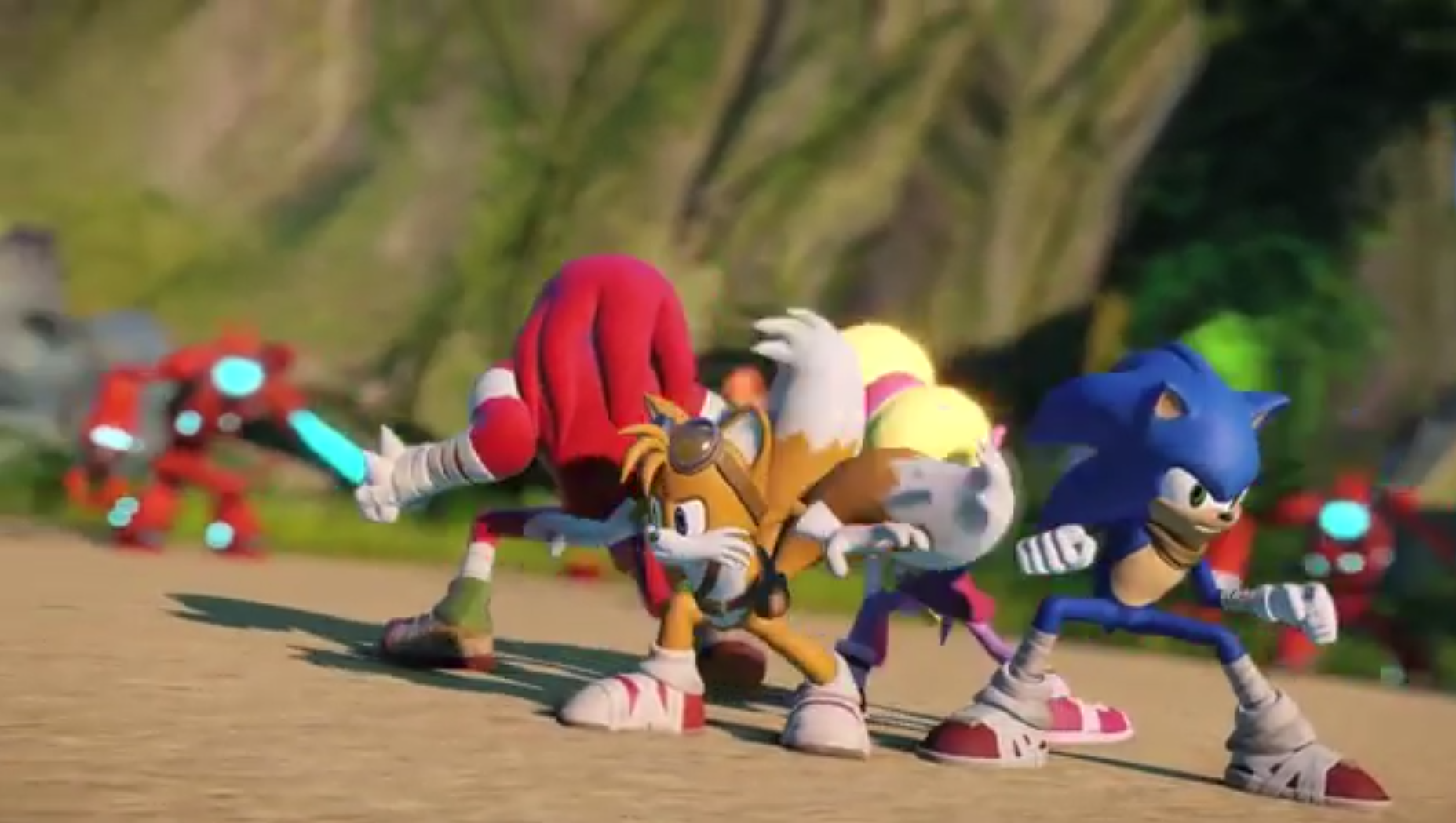 “We spent a lot of time before we started working on the game animation drawing and doing sketches to explore how it all connects together,” said Frost. “The big thing to get across is that in a traditional Sonic game you run from level to level without any connection between them.  Part of the key component with Sonic Boom was building this world and making sure everything fits in its proper place. There are hubs and everything is connected. When you’re heading in a direction you know where that’s going and you know where you’ve been. That carries forth to the animation.”

The Sonic Boom television series, coproduced by Sega of America and OuiDO! Productions, will debut on Cartoon Network in the U.S. and on CANAL J and Gulli in France during the 2014/2015 season.  The series is an ensemble comedy consisting of 52 11-minute standalone episodes packed full of high-adrenaline action.  Every episode starts from a small character-driven story and explodes into an epic tale of saving the world, robot battles and more.

Serving as a prequel to the stories revealed in the TV series, the Sonic Boom video game will deliver a totally different experience to previous Sonic games with collaborative gameplay at its core.  Developed in the U.S by California-based Big Red Button Entertainment (Wii U) and Sanzaru Games (Nintendo 3DS) in collaboration with Sonic Team, this is the third title to be released as part of an exclusive deal with Nintendo. Sonic Boom will take advantage of the Wii U and Nintendo 3DS hardware and incorporate traditional elements of Sonic games like speed. The game will also introduce exploration, combat and a new Enerbeam tether mechanic that will allow the Sonic Boom world to be discovered in unique ways.

“What’s great about this collaboration is that we may take you to areas of this world that the animated TV series doesn’t and they might take you to places that we don’t,” said Frost. “Between the animation, the game, and the toy line you’re going to see this much bigger world than you’re used to from past Sonic titles.” 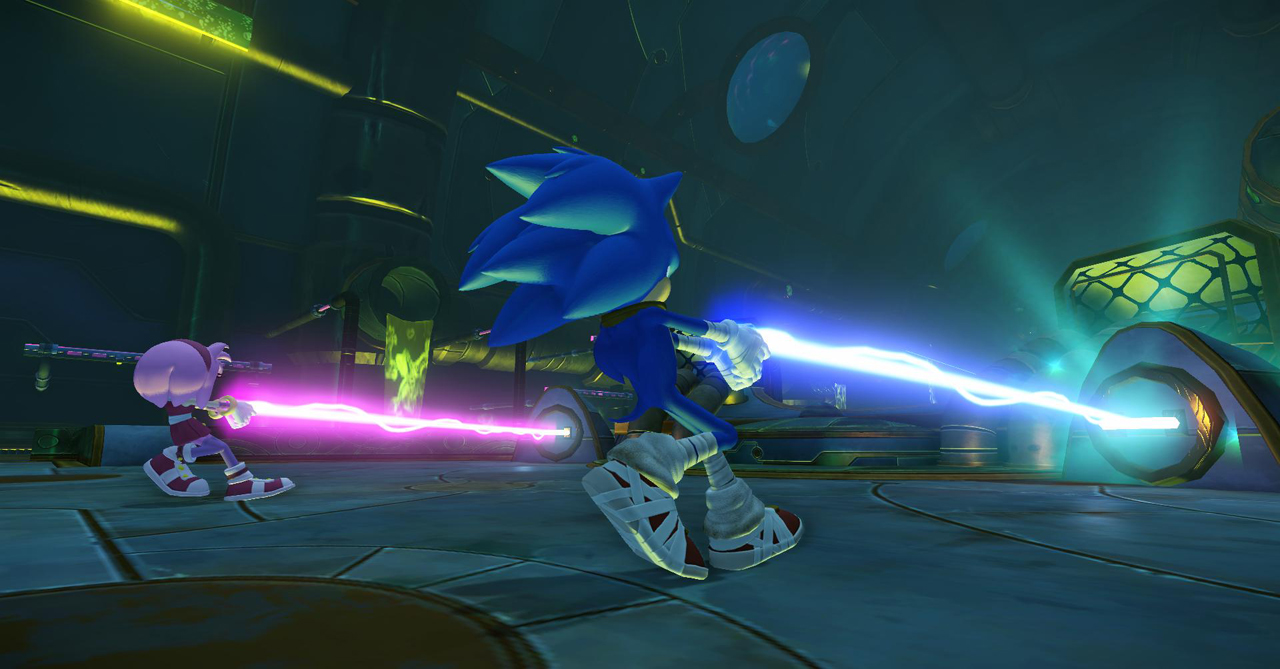 Sonic Boom will be supported by a robust global licensing and merchandising program, anchored by new master toy partner Tomy. The line will showcase the new character looks, stressing interaction between core characters, and will feature new play patterns based on both the new game and TV series. Tomy will develop a comprehensive toy range across a broad number of categories including plush, action figures, remote-controlled vehicles, role play and novelty. Sonic fans can expect a high-quality, collectible toy line fueled by Tomy innovation and energized with speed, lights, sounds, motion-activation and action-performance.

Sega will launch a broad licensing program across multiple categories including toys, apparel, publishing, accessories, food and beverage, health and more – making this one of the biggest license initiatives Sega has undertaken in recent years. The company will enlist many of its current partners who have had tremendous success with Sonic over the past years while seeking new licensees to join this new Sonic licensing program.

“We want to ensure that the Sonic brand continues to evolve and appeal to new generations of Sonic fans and this different look introduces a fresh approach that will be at once both familiar and new to consumers,” said John Cheng, President & COO, Sega of America. “We are committed to supporting this initiative to provide great entertainment to fans for all aspects of their lives.”

Sonic the Hedgehog first appeared as a videogame character in June 1991 and instantly became an icon for a generation of gamers. Defined by his super-fast speed and cool attitude, in the years since he first raced on to videogame consoles Sonic has become a true global phenomenon with over 140 million video games sold or downloaded worldwide across consoles, PCs, mobile phones and tablets. Sega’s iconic blue blur has also gone on to enjoy incredible success in many licensed areas, such as toys, apparel, comics and animation.