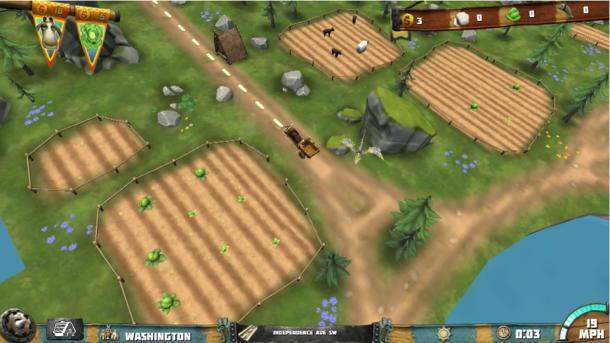 With Dreamworks Animation Studio rolling out a theatrical sequel to How To Train Your Dragon hitting theaters June 13, 2014 and the hit TV series keeping the franchise connected with kids, Jeffrey Katzenberg’s company has partnered with Nokia and Qualcomm to unleash a unique new mobile game experience designed for the Nokia Lumia tablet and phone. The new Dragons Adventure game joins the free-to-play online game, School of Dragons, and assorted console games in the Dragon universe.

The Dragons Adventure game uses Here Maps to transform actual landmarks along a drive into the fictional Isle of Berk. Roadways, lakes, real-life traffic and weather conditions and even select buildings are mirrored into the game, personalizing it and transforming the drive into a captivating adventure. Built for the Nokia Lumia 2520, which features Qualcomm Snapdragon technology for enhanced gaming, Dragons Adventure also incorporates a companion mode that allows other players to participate by using their Windows Phone 8 Lumia smartphone to create missions, change the action and add new challenges.

Players begin DreamWorks Dragons Adventure in the At-Home Quest mode, where they assume the role of a dragon trainer in the magical Isle of Berk. They start by picking their dragon, and caring for their stable and village. Next, they progress to Driving Quest mode where they pursue quests while traveling in the city, on highways or country roads. The real world environment including the roadways, time of day, and even traffic conditions and weather is reflected into the game as they hatch dragons, earn achievements and collect loot. After completing quests, the adventure continues as players care for their dragons, and visit the Dragon Academy to trade loot for dragon skills. The ultimate goal is to become a Dragon Master.

Bryan Biniak, vice president and general manager of developer experience at Nokia, explains what differentiates this Hollywood licensed interactive adventure from others in this exclusive interview.

Can you describe the experience gamers will get with Dragons Adventure?

You have a tablet and a Nokia Lumia device, a phone as an example, and the two of them work together to create this companion experience.  When you’re driving in the car, the world around you is transformed in this game, and we use 3D animation technology to take the world of How to Train Your Dragon and transform it wherever you are in the world, Los Angeles, New  York, Paris, Moscow, into this 3D animated Isle of Berk.

Can you talk about the technology that connects the real world to this virtual world?

We use Nokia Here maps technology and we’ve created proprietary technology that uses Unity and then takes the story of How to Train Your Dragon and transforms all of these different points of interest like parks, schools, stores, the weather outside, and brings that into the game as you’re driving. It creates a real-world experience where you have the ability to fly dragons, capture dragons and all kinds of other things in this very special place.

What role has new mobile technology played in spurring creativity for games like this?

The power of these devices is amazing, but bringing real-time animation capabilities to a device wasn’t something that was possible before. To animate in real-time based upon things that you’re driving through and around and bring that to life as part of a story was not possible before. Imaging technology has also improved.  With this product you can hold up your device, see dragons flying around you, capture them, and then they will appear in real-time in the game.

What makes the How to Train Your Dragon universe so ripe for games?

Kids spend a lot of time commuting with their parents in the car and because of that it’s a lot of disconnected time.  Parents hand the device to their kids, the kids start playing games and then they don’t talk again until it’s time to get out of the car. Usually that’s not a positive experience because the parent has to take away the device.  This is an experience that’s meant to create a connection between the parents and their kids so they can have fun. It’s something that the kids want to do, but also the parents get to enjoy as well.

How does this new game differentiate itself from the console and online games we’ve seen for the first movie?

As far as this game is concerned, the game doesn’t exist until you get in the car. By driving your car down the road, the game is actually creating itself based upon all the things that are around you and also the storyline of the game. That’s something that doesn’t exist on a game console because clearly you’re not driving your car while you’re playing a console game.

Can you talk a little bit about your relationship with Dreamworks and how you work together?

We sat down together to come up with some ideas for the game and we decided that we wanted to do something that nobody had ever done before. This was technology that we invented.  We tried to solve a real-world problem and bring it together in a way that only Dreamworks can bring it to life for consumers.

How have advances in technology on the CG side, as well as on the gaming side, opened up new doors for sharing assets and models for games?

That’s been fantastic because we’ve actually been able to use the models, the rigs, that Dreamworks uses in the actual How to Train Your Dragon television program.  We’ve been able to leverage all of those assets and convert them into animation and technology that can be used on a device in a native application.

Can you go into more detail about what are some of the similarities between CG movies or the TV show and how they make games today?

One of the most exciting things about this game is that you have the ability to capture and train dragons and learn how to fly these dragons. Dreamworks literally has hundreds of dragons, so each dragon has its own unique characteristics. We were able to capture the movements of these dragons  and bring that to life in this mobile game which is not something that you’ve seen before.

Check out what the Pico Neo CV can do!