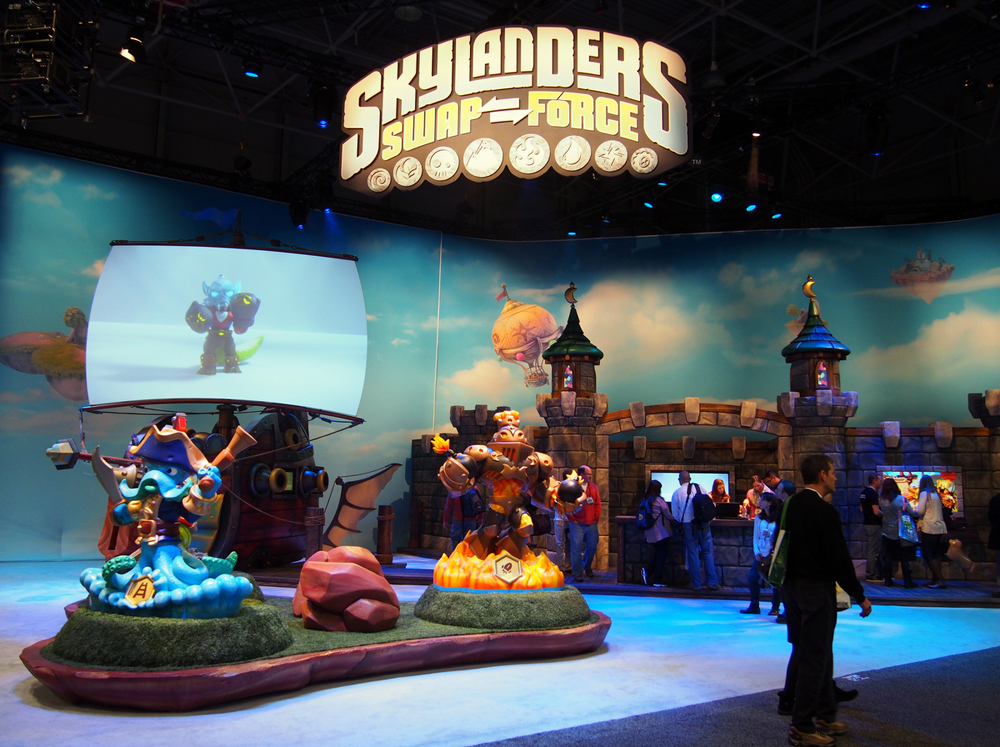 Activision won’t be using the 2014 New York Toy Fair to debut its fourth Skylanders game and toy line. Fans will have to wait until later this year for that. The good news is that original Skylanders: Spyro’s Adventure and Skylanders: Giants game developer, Toys for Bob, is behind the helm of this latest interactive adventure.

Activision looks to be setting up a multiple developer schedule to release a new Skylanders game every year – the same set-up it has used with its Call of Duty franchise, which has seen Infinity Ward, Treyarch and Sledgehammer Games develop new titles in that first-person shooter franchise.

The Skylanders game franchise has rocketed past $2 billion in sales. In addition to the two cross-platform games, Activision has sold over 175 million action figures – which connect directly to the game world. Skylanders: Swap Force introduced interchangeable action figures that swapped out the virtual powers of characters in-game.

“Skylanders crossed $2 billion at retail faster than any other independently published game,” said Eric Hirshberg, CEO, Activision Publishing. “Skylanders is the second fastest any game has reached that milestone after Wii Fit. Skylanders is also now on the list of the Top 20 game franchises of all time, and it joins that fraternity after only three titles.”

It’s not just the games that are driving revenue at retail. Hirshberg said that if you looked at the Skylanders action figure sales alone, it would be the number one action figure line in the world in 2013. Skylanders outsold long-standing franchises like Teenage Mutant Ninja Turtles and Star Wars in the competitive action figure arena. For that reason, Skylanders will still have a solid presence at Toy Fair 2014.

‘The last few years we’ve revealed the new Skylanders game at Toy Fair and used it as a launching pad for the next title, but we’re revealing the new game later in the year,” said Hirshberg. “Skylanders is a big licensing business for us and we have a lot of partners. It’s important for us to be there. The toys alone are a leading product in the toy industry.”

In addition to the toys and games, Activision has over 150 licensing partners in the marketplace today. Merchandise spans all categories from bed sheets to backpacks to Monopoly games. Skylanders is the most-licensed franchise at Activision.

“Many brands launch and then release a video game, but with Skylanders and the game was the launching pad,” said Hirshberg. “Our license partners have done a great job of expanding the appeal of the brand. Licensing makes sense for Skylanders because of the way kids consume characters that they love. They want to have them everywhere. And we’ve been able to deliver cool Skylanders things in categories besides toys and games.”

With other game characters like Bandai Namco’s Pac-Man, Sega’s Sonic the Hedgehog and Ubisoft’s Rabbids expanding to TV series, Hollywood is one arena the Skylanders have yet to invade.

“We have been considering it carefully, but we want to have the right creative control,” said Hirshberg. “Creating great games is our business. If there’s a way to expand Skylanders to other media and it makes sense, that’s something we would consider.”

Hirshberg said that during the early development days of the creation of this franchise, many questioned Activision about moving forward with this venture with original characters.

“I’d be asked why not do this with licensed characters, but I feel like that idea underestimates video games as a medium and the power they have to launch characters in our culture today,” said Hirshberg. “We’ve received such an overwhelming response from companies like McDonald’s, which launched Skylanders Happy Meals as a new IP (intellectual property) and a game IP.”

While Disney Infinity has sat out the next generation console business to date, Activision launched Skylanders: Swap Force on Xbox One and PlayStation 4 as launch titles last fall. Hirshberg said those games deliver better graphical fidelity.

“We wanted to deliver a great game for current gen and also establish Skylanders as the kids franchise for next gen,” said Hirshberg. “The next gen version received critical praise and was one of the more compelling titles for the new consoles.”

Although Skylanders has explored the mobile space with top-charting apps like the Skylanders Collection Vault and Skylanders Battlegrounds, Hirshberg said because the toys act as the controller in the console games those offer the best experience to gamers.

“As a franchise, Skylanders was born through breakthrough creativity,” said Hirshberg. “It’s all about building on the must-play innovation and ‘wow’ factor that the original delivered. We’ve striven to deliver another innovation with each new game and toy line. We’ll have a big new innovation this year, as well.”

Gamers will have to wait longer to find out what’s next for the world of Skylands. Another way of looking at it is the wait between the reveal and launch of the new games and toys, which typically happens late summer/early fall, will be shorter this year.