Aaron Paul Has A Need for Speed 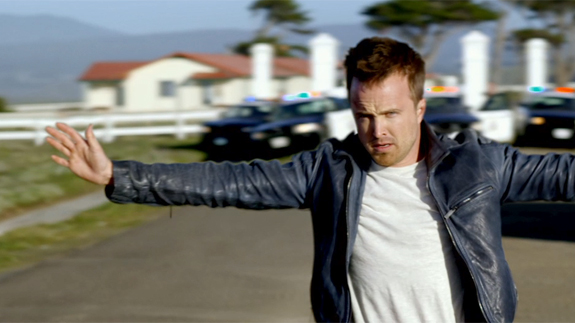 DETROIT - With Electronic Arts selling over 140 million copies of Need for Speed video games over the years, DreamWorks decided to bring the racing action to the big screen. But director Scott Waugh (Act of Valor) didn’t want to make a cheesy, special effects-laden driving flick. The stunt man-turned-Hollywood director pays homage to the classic car films from the ‘60s and ‘70s by filming all the stunts in real life (which is pretty amazing after you’ve seen the movie).

Behind the wheel of this movie franchise is Aaron Paul, who proved his acting chops in the Emmy Award-winning series “Breaking Bad.” Paul plays mechanic Tobey Marshall, who builds and races muscle cars on the side. After being framed for manslaughter, Marshall sets out on a cross country chase for revenge in a custom-built Ford Mustang. That same car is available for gamers to drive in EA’s Need for Speed Rivals game. Paul talks about his own experience with cars in this exclusive interview from the set in Detroit.

When did you know Breaking Bad was something special?

Looking back when we all watched the pilot for the first time at the Sony lot in a screening room and just seeing it all piece, we knew we were part of something special just because the script was so brilliant. Just seeing their vision of what they wanted to accomplish, we were just all kind of floored. We just couldn’t believe that we were a part of something like this, but we still didn’t even know if it was picked up or not. Our whole thing was, “All right, I hope the next episode is half as good as this one.”  That was the main challenge to keep the quality up there, and I think they definitely did that.

How did you celebrate the finale of Breaking Bad?

I rented out the Hollywood Forever Cemetery and we played the pilot episode and then we played the final episode. I got Jimmy Kimmel to moderate the little Q&A afterwards and it was great because we put the tickets up for my wife’s nonprofit Kind campaign and we sold out in 36 seconds.  We raised just under $2 million and it was fantastic. I was so happy with the way it ended. You could hear a pin drop in that cemetery during the final episode. Vince was a little nervous to play it with that many people, there were thousands and thousands of people there, but everyone was so respectful and they were so invested. If anyone screamed out I think their neighbors would have knocked them out.

What was it like going from Breaking Bad to Need for Speed?

I land. It's 2am. I'm in this little airport (in Mendocino), but it's closed, and no one comes to pick me up. The cell service was non-existent, so no one knows I'm there. I just wrapped the highlight of my career, so I'm super bummed... I'm standing in the middle of the rain just waiting to get picked up for two solid hours. It gave me time to think, “What am I doing?"

How did it feel coming off of Breaking Bad and that intensity and then doing an action movie?

It’s been like a night and day difference in a way, but it’s great.  I’ve never really done a lot of action, but for a film that has a lot of action…there’s just a lot of sitting around doing nothing. There’s a lot of hanging out watching the stunt men make my character look bad ass and I’m like, “Good job.  Thank you for doing that for me.

You’d always done movies while “Breaking Bad” was going on, but as you approached the end of that series was this really a chance to transition into leading big movies?

Yeah, I think it was the time for me to jump into the studio system.  I always just gravitated towards the small passion projects and I still do those. Right after I shot Need for Speed, I did a little film called Hellion that was at Sundance this last year and we did it for like $400,000. Everyone was doing it because of the pure love and passion for it. I just love independent filmmaking because you walk on set and there’s about 30 people on the crew just making something that they all believe in. You know everyone’s first and last name and you know their stories. With the studio system, I’m just learning that the crews are just so giant that it’s really impossible to meet everyone. I just wrapped a film right before the holidays, Exodus, and there were about 700 crew members. It’s impossible to meet everybody and then you don’t remember if you had met the person and you feel bad about it. But I thought it was time to jump into the studio system, that way I could still do the passion projects.

What was it like filming across the country in Need for Speed?

That’s another reason why I wanted to jump into this film, just the fact that we did get to drive across this beautiful country of ours. We shot in seven different states, and it was incredible. We were there for some time, and I had a lot of time to really enjoy it. I was working every single day Monday through Friday, but I had the weekends off if I wasn’t traveling. This is a beautiful country. It was the first time I ever experienced Moab?, Utah, if you haven’t been there. The Salt Flats were great, but Moab? Is like you’re in a Mars rover riding around on the surface and it’s gorgeous.