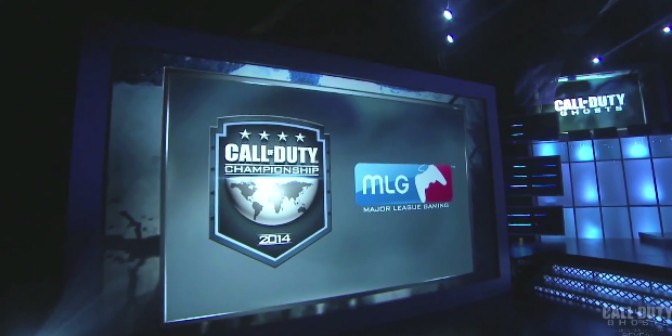 Activision and development studio Infinity Ward are celebrating the talent, passion, and skill of Call of Duty's best eSports players with the 2014 Call of Duty Championship, presented by Xbox. Beginning today through Sunday, March 30th in Los Angeles, 31 of the most skilled Call of Duty: Ghosts multiplayer teams from around the world are competing head-to-head on Xbox One for the honor of being named the Call of Duty World Champions, and their share of the tournament's $1 million total prize purse. Fans can tune-in to every thrilling, action-packed moment through livestreamed coverage of the Call of Duty Championship, presented by Xbox on MLG.tv and at Call of Duty.com, and on Xbox.com in Europe. Additionally, the tournament's final match will take place Sunday, March 30th with the livestream starting at 3:00 p.m. (PDT) on the Xbox Live Dashboard (in participating regions).

"The global popularity of Call of Duty continues. Last year alone fans logged over 5 billion hours playing Call of Duty, and now it’s time to see who's the best of the best," said Eric Hirshberg, CEO of Activision Publishing. "The Call of Duty Championship is a celebration of Call of Duty, featuring a tailor made livestream for fans to experience and enjoy all the action in real-time. Last year's finals came down to the final moments of the final match, and we can't wait to see how it all unfolds this year."

These 31 teams from six continents around the world have trained extensively over the past few months, winning their respective fellow regional competitions in qualifying events conducted by the professional competitive gaming organizations of Major League Gaming (MLG), Gfinity, and the Australian Cyber League (ACL). Teams like NSP from South Korea, European Champions TCM Gaming from UK and Brazil 5 Star from Brazil, will compete against such notable teams from North America as CompLexity, EnVyUs, and MLG U.S. Champions Strictly Business.

The Call of Duty Championship, presented by Xbox begins with round-robin style pool play among eight groups of four teams.  The top two teams from each group will advance to a 16-team double elimination bracket, where the team that places first will take home $400,000 of the tournament's $1 million dollar total prize pool. The remaining seven teams will each take home prizes ranging from $200,000 for second place to $25,000 for eighth place. Further details on the 2014 Call of Duty Championship, presented by Xbox, including full rules and regulations, Call of Duty: Ghosts maps and modes for the tournament, livestream information, prizing distribution and more are available at https://callofduty.com/esports.