Cam Newton In The Mix For Madden NFL 15 Cover 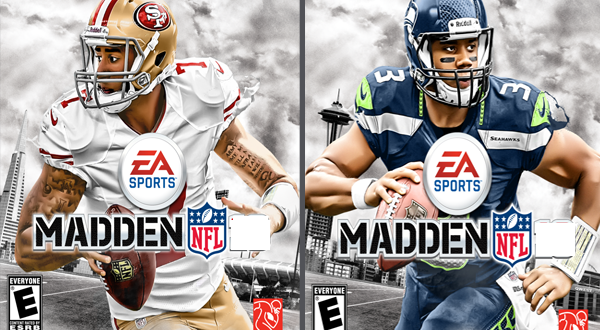 At the NFL Draft, Electronic Arts and ESPN revealed details about the Madden NFL 15 Cover Vote. This year’s competition sees 16 of the brightest young stars in the game squaring off in a bracket to determine who will adorn the cover. Fans can now vote once per day at ESPN.com/maddenvote, and discuss and debate on social platforms such as @ESPNNFL and the NFL on ESPN Facebook page with the hashtag #MaddenCover. Every Thursday, the results of each round of voting will be announced during NFL Live at 4 p.m. ET on ESPN accompanied by expert analysis and conversation.  Players in the running will also make special appearances on ESPN programming and platforms throughout the vote, campaigning for their right to be on the cover of Madden NFL 15.  The two finalists will appear and the overall winner will be announced live from LA LIVE Plaza in a special segment during the 6 p.m. hour of SportsCenter on Friday, June 6.

Here’s the full breakdown of first-round matchups, as well as each player’s seeding in this year’s bracket:

“The Madden NFL Cover Vote is always a special time of year,” said EA Senior Director of North American Marketing Randy Chase. “I’m curious to see if the 12th Man can propel Richard Sherman to the cover, or if the 49ers fans get their revenge and knock him out of the competition. No matter what, there are going to be some great matchups and intense rivalries.”

“Every year, ESPN and EA Sports continue to go bigger with the Madden NFL Cover Vote,  and there’s no better way to kick off the vote for Madden NFL 15 than having last year’s winner and NFL legend Barry Sanders announcing it on stage at the NFL Draft,” said Raphael Poplock, vice president of games and partnerships for ESPN.  “We are building on our momentum over the last three Madden NFL Cover Votes to deliver an engaging experience that puts the cover in the hands of the fans, which have resulted in some of ESPN’s most successful social activations to date.”

Madden NFL 15 is focusing on both sides of the field, including the most immersive defensive gameplay control in franchise history. Like the Super Bowl XLVIII champion Seattle Seahawks, you can win championships and bask in the glory of success by building a great defense fit to challenge the best offenses in the game. Fans will also experience an entirely new broadcast presentation that delivers Madden NFL game day like never before with dramatic all-new camera angles, as well as dynamic pre-game and halftime features. It’s not just football, it’s Madden Season.

Also at the NFL Draft, EA Sports made every first-round selection available in Madden NFL 25 as a part of Madden Ultimate Team. Throughout the evening as players were selected, theMadden NFL development team was hard at work inserting new players into Ultimate Team packs and giving fans their first chance to play with the members of the 2014 first round Draft class.

Madden Ultimate Team gives fans the opportunity to collect star players, set lineups, and complete collections to earn coins, special packs or rare players and items. In addition to buying packs in the online store, Ultimate Team enthusiasts can post and bid on items and players on the auction block. The mode is updated throughout the NFL regular season and beyond, providing fresh content for major events like Thanksgiving, the Super Bowl, Free Agency and more.