Reloaded Productions announced recently that they are "live-releasing" the free online massive multiplayer Fallen Earth. The update that Reloaded is pushing is heavily farm-related. Examples from the update are different plot sizes for the crops grown, plant and grow seeds or clone livestock, which sounds really cool. Work hard and you will be rewarded with rare items as well as having a special farmhouse that you can show off your farm. It is an interesting idea and sounds like creative farming and item creation should have been in Fallen Earth before or at least as detailed as it is in this update. 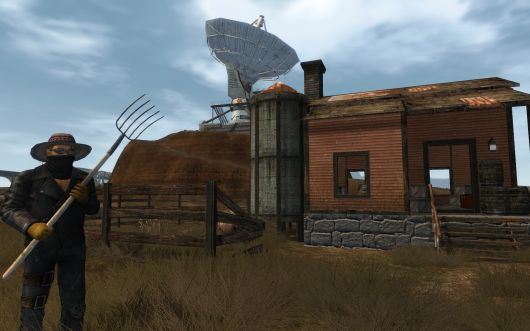 "Farming has arrived, and promises to redefine how players perceive and utilize the vast Wasteland of Fallen Earth", said Asa Reed, Producer for Fallen Earth. "By creating an outlet for players who relish the idea of establishing their own roots in world, farms provide players a visible economic and social reward for their hard work which they can share with their friends and clan mates” was also said by Reed. The game reminds me of the Oregon Trail set in a post apocalyptic war zone where players have to fight to survive. If more games can add to the war zone survival game, gaming will be in good shape.