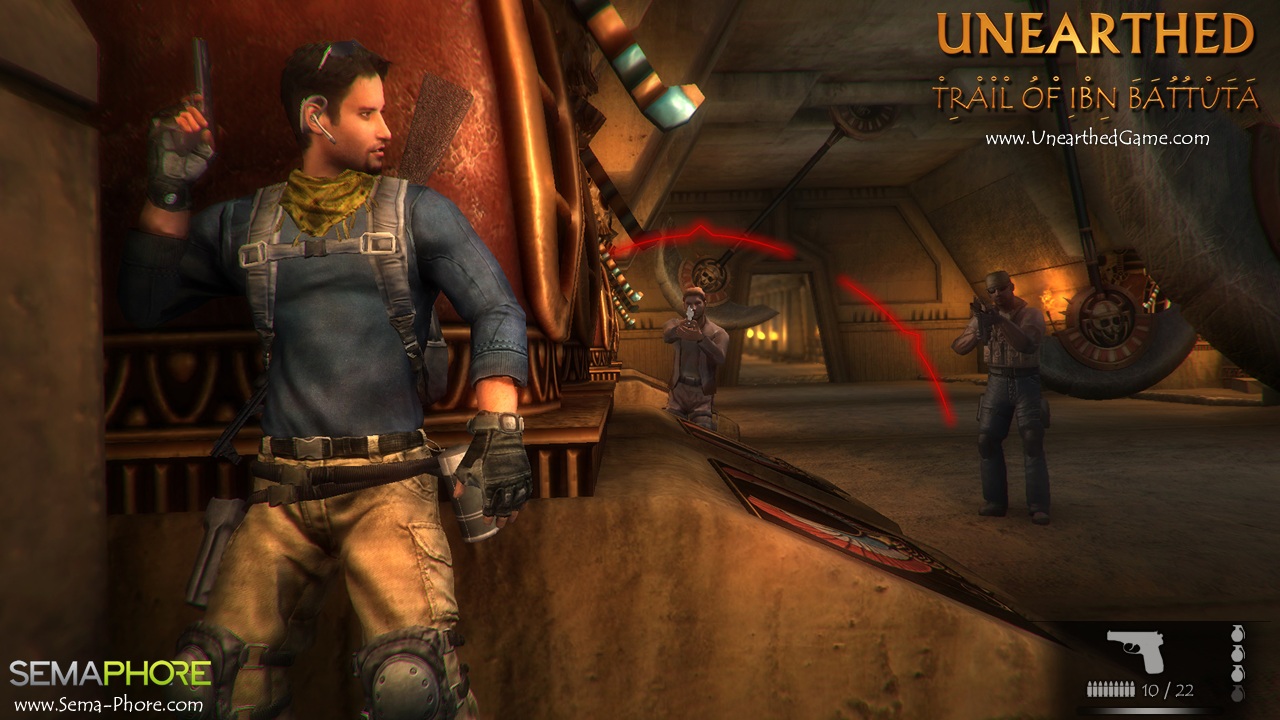 Unearthed: Trail of Ibn Battuta is an episodic third-person action-adventure game set in the modern day Middle East. The game, which features both Arabic and English voiceovers, is coming to Android with HID controller support. Developer Semanoor International has been enhanced for Nvidia Shield and takes advantage of Tegra 4 technology by utilizing vignetteing, chromatic aberration, color correction, lens dirt effects, bullet decals, car body damage, tire tracks and double the texture resolution than any other mobile device. Ahmad Jadallah, director of development at Semanoor International, talks about the game in this exclusive interview.

When fortune hunter Faris Jawad and his sister Dania receive a call to visit Morocco they embark on an exotic adventure throughout the Middle East on the trail of the famous Muslim explorer Ibn Battuta. The trail won't be clear, however, as Faris will have to overcome an unholy alliance of a militia army leader.

Typically, for games that are multiplatform (say a third person action adventure like Unearthed) you tend to find that the PC or console version provides the full experience, while the mobile version of that game is often regulated to a 2D side scroller that’s stripped down from everything that made the PC/console version popular. In our case, we wanted to provide the full experience across all platforms with the difference being purely the controls and the high-end visuals. We managed to achieve that with Unearthed and this opens up a lot of great new opportunities for our future projects.

Unearthed brings episodic story-telling to the action adventure genre. One of the main focuses of the series is to provide a non-stereotypical portrayal of lead female characters in games and a fresh outlook on the Middle East and its rich culture and history

We started work with Nvidia back in 2012 on optimizing the game for Tegra 3 at first and then on Tegra 4 with the Shield.

Nvidia provided us with access to the early development kits for the Shield, as well as performance analysis tools in order to deliver the best performance for the first episode of Unearthed.

How does your game make use of the latest Tegra 4 technology?

Unearthed adds various graphical enhancements exclusive to the Tegra 4/Shield version like vignetteing, chromatic aberration and color correction. There’s also lens dirt effect when the lights shine at the camera a certain angle. With vehicles there’s damage to the actual body of the car in the car chase level in the game and tire tracks on the ground when drifting. The game also features extra particle effects for explosions, dusts and engine exhaust. And there’s double the texture resolution of any other mobile device. All of this while maintaining a rock solid 30 FPS at full 720P resolution. The result is that if you connect your Shield or Tegra 4 powered device to a TV you will get a high quality output. 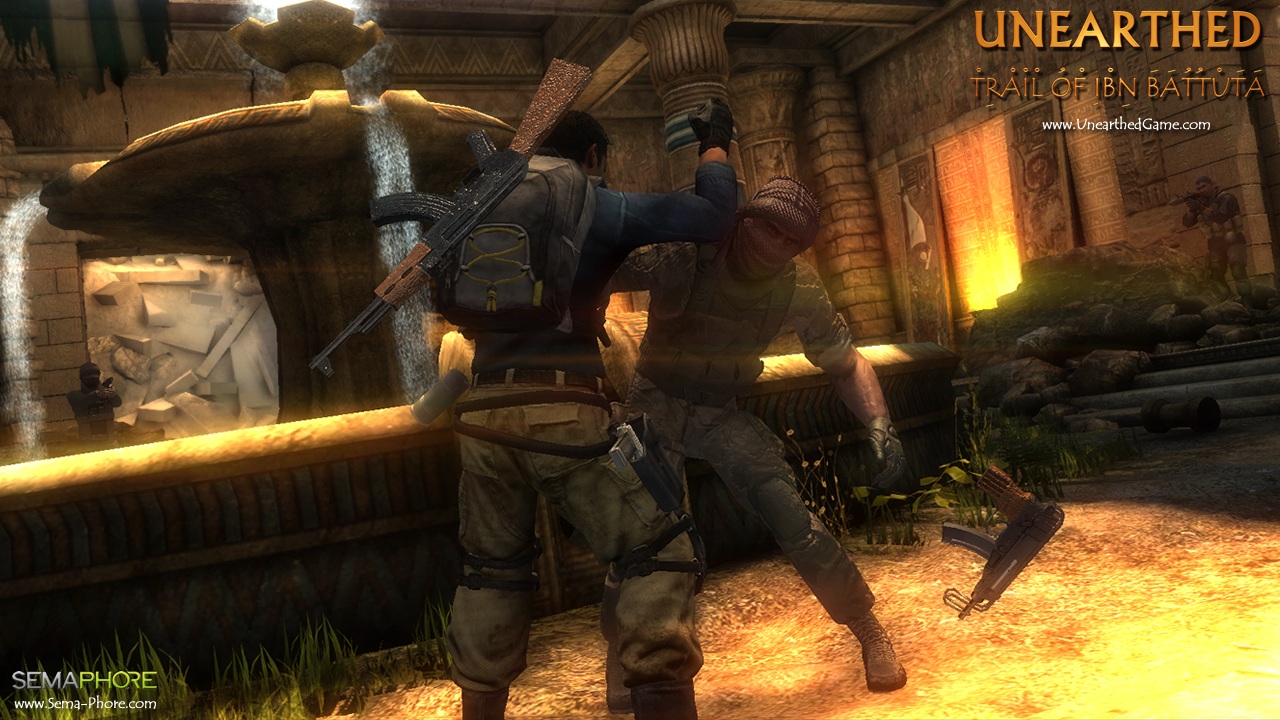 Fragmentation is definitely the biggest challenge in my opinion. It is difficult enough developing a game for a device that has less power than a traditional PC or console, but it is made even more difficult by the fact that there are so many different variations of hardware to keep in mind.

With Tegra chipsets, Nvidia is increasingly bringing high end graphics to the mobile market. The rate of advancements is stunning and it is only a matter of time before we see amazing gaming experiences on the go thanks to technologies like Tegra.

What are your thoughts on what can be done with tablet gaming today?

Tablets built their success on ease of use and natural human interaction, and games that took advantage of that reaped the reward. For games that are cross-platform, you need to support alternative control schemes to cater for different types of players. Unearthed has full support for both virtual buttons and joysticks as well as external gamepads for Android and you can switch between the two on the fly while the game is playing and without even restarting or getting back to the main menu. The game will simply sense that you are using a controller or that you are swiping on the screen and will switch the input and user interface accordingly.

What are your thoughts on Shield?

The Shield is in many ways a dream come true for both gamers and developers by combining a sleek form factor with the processing power to deliver high quality games. I cannot wait to see what the future holds for this product.

What does Shield open up for your game?

Shield addresses several key issues for us. First of all, controls are much more familiar to hardcore gamers since it is very similar to what you expect from game controllers. Second, there is the fact that it boosts 2 GB of RAM. This is a huge amount that allows us the freedom to use the full texture resolution for our assets without worrying about fitting into smaller memory limits. Last but not least, Shield features Tegra 4 which is an amazing chipset that is capable of handling high end visual effects that were previously only seen on consoles and PC, all while maintaining a solid frame rate.

The upcoming Episode 2 of Unearthed, which we are currently working on utilizes the Unreal Engine 4. It was a huge relief to see Unreal Engine 4 being demoed on the Tegra K1 upon its reveal. That is a huge step forward for mobile gaming and it will further blur the line between desktop/console and mobile/Tablets. We are currently exploring what can be done utilizing the Tegra K1 for Episode 2 and beyond.

The fact that you don’t have to worry a lot about preparing two drastically different set of shaders and lighting set-ups for your game if you are developing for Tegra K1 means that you are free to focus more on iteration, gameplay and polish which will take your product to the next level.